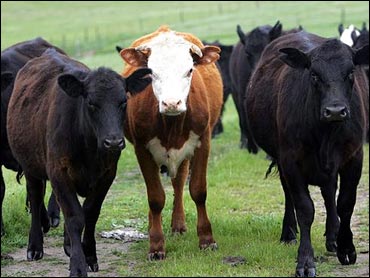 An anthrax outbreak has killed hundreds of cattle in parts of the Great Plains, forcing quarantines and devastating ranchers who worry how they will recover financially.

More than 300 animals in North Dakota have died from anthrax in what officials call the worst outbreak among livestock in state history. In South Dakota, at least 200 cattle have been killed. Two ranches in Texas were quarantined last month after anthrax was found in cattle, horses and deer, officials said.

Allen Lambrecht lost nine cows, or about $9,000, along with the value of future calves.

"It got to where you didn't want to get up in the morning," said Lambrecht, whose family has farmed in North Dakota for three generations. "You would get up and go out and see what was left."

Although anthrax didn't gain public notoriety until the still-unsolved mailing attacks that left five people dead in 2001, farmers have been dealing with the disease for decades. Spores that cause anthrax can sit dormant in the ground for as long 100 years, said Charles Stoltenow, an extension veterinarian at North Dakota State University.

"It just sits there and waits for the right environmental conditions to come around," he said. "You can't predict it."

Humans are not considered at risk to catch the disease, as long as they don't come in contact with blood and tissue of an infected animal.

"You're not going to be infected unless you skin and butcher an animal that's infected," says Martin Hugh-Jones, an anthrax expert and retired Louisiana State University professor. "As long as you're not tempted to open up a carcass, you're not in danger."

Unusually wet conditions in June, along with high heat and humidity in July, likely played a factor, veterinarians said. Some areas of southeastern North Dakota had more than a foot of rain in one month.

"We've had anthrax before, but not of this magnitude," said Andrew Peterson, a veterinarian at the Enderlin Veterinary Clinic in North Dakota. "It started on July 1 and the reports have been daily since then."

The state has quarantined 85 areas, which means those producers cannot sell, butcher or transport animals.

A vaccine that can prevent anthrax is available at less than $1 a dose, Peterson said. While it's routine to vaccinate cows in the spring, when they receive other medicine, it's difficult in the summer when they are grazing in open pastures, ranchers said.

Antibiotics, usually penicillin, can "save a cow from the edge of the grave," Hugh-Jones said. However, many animals die within hours of appearing normal.

It's likely that any deer infected with the disease already will be dead before the bow season starts in September, Hugh-Jones said.

"We still want to make people aware of it," said Greg Link, spokesman for the state Game and Fish Department. "People should use the same common sense they normally should. Don't shoot an animal that's sick, use precautions when opening up an animal, and cook your meat well, anyway."