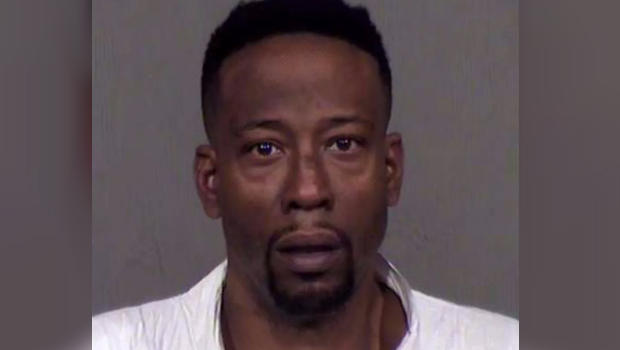 PHOENIX -- A man is accused of shooting and killing his estranged wife and their two children at a Phoenix apartment complex before getting into a Christmas Day shootout with officers, authorities said Tuesday. Police responded Monday afternoon to a report of gunfire and found a woman dead in the parking lot.

Officers later found the bodies of a 10-month-old girl and an 11-year-old boy inside the apartment. The identities of the woman and children are being withheld pending family notification.

Police tried to talk to Anthony Ross, 45, who barricaded himself inside the unit where he used to live, Sgt. Jonathan Howard said. Several hours later, Ross indicated he had killed the two children and began shooting at officers. After a brief gunbattle, he was taken into custody.

Ross, who was visiting Phoenix for the holidays, was not hurt, Howard said. One officer was injured by shrapnel and taken to the hospital in stable condition.

Tactical units on Monday escorted residents from the area, and some clustered outside a convenience store for hours until the standoff ended. Others returning home weren't allowed in. Several residents waited in parked cars across the street for hours until police resolved the incident.

"I can't believe it's Christmas and there's a shooting or whatever's going on. It's eerie. I feel bad for whoever is going through this," Kristen Alexander told CBS News affiliate KPHO-TV.

Police described the shooting as a domestic violence incident. It remains unclear whether Ross has a lawyer who could speak on his behalf. The motive for the shooting remains under investigation.