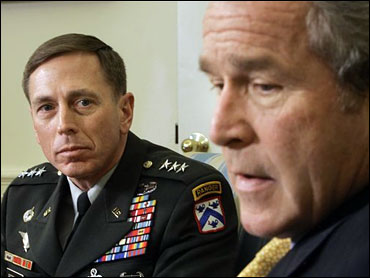 This column was written by Lawrence F. Kaplan.

Of all the depressing ways that the war in Vietnam has been replayed in Iraq — the failed architect of the war being promoted to World Bank chief, the failed ground commander being promoted to Army chief of staff, congressional Democrats reverting to Vietnam-type, the whole rotten litany — nothing can top the belated dispatch to Iraq of David Petraeus, a general who actually knows what he's doing.

Armed with a strategy that rejects nearly four years' worth of big-unit sweeps and the widespread application of conventional tactics against an unconventional foe, Petraeus has instead focused on securing Baghdad's population. Already, attacks and executions in the capital have (depending on the source) declined by one-half to one-third. Alas, the surge could transform Baghdad into Zurich, and it wouldn't be enough to budge the course of the U.S. enterprise in Iraq. That's because the base of support for the war — American public opinion — has utterly collapsed, and it's not the public's fault. If the circumstances seem familiar, that's because they are: In General Petraeus, the ghost of Creighton Abrams walks again.

Analogizing Petraeus to General Abrams, the highly regarded commander of U.S. forces during the latter years of the Vietnam War, has become a favorite pastime in Baghdad and Washington. And for good reason: As with so many other public figures tied to the Iraq war, the likeness to a Vietnam-era personality is downright eerie in Petraeus' case. Like Petraeus, Abrams replaced a commander plainly not up to the task — William Westmoreland in Abrams' case, George Casey in Petraeus'. (Asked at a press conference how he intended to combat the insurgency in Vietnam, Westmoreland famously responded with a word: "firepower.") Like Petraeus, Abrams rejected his predecessor's approach in favor of a "clear and hold" strategy that elevated the importance of population security over the tactic of destroying the enemy. After Abrams assumed command, recounts General Fred Weyand in Lewis Sorley's A Better War, "tactics changed within fifteen minutes." Substitute "Iraqi" for "Vietnamese" and Abrams's "one-war plan" — which aimed "to provide meaningful, continuing security for the Vietnamese people in expanding areas of increasingly effective civil authority" — reads like a distillation of Petraeus' "best practices" of counterinsurgency.

But the resemblance between the two generals goes beyond the particulars of strategy. In the narrative of Vietnam embraced by the officer corps — and popularized in books such as Sorley's — Abrams all but won the war only to be robbed of victory by a weak-willed public and a perfidious Congress. By 1972, "the pacification program had essentially eliminated the guerrilla problem in most of [South Vietnam]," the program's deputy, William Colby, recalls in his book, Lost Victory. By then, of course, the operational in clock in Vietnam was so badly out of sync with the political clock in Washington that it no longer really mattered. A similar complaint is rapidly becoming conventional wisdom among the officer corps in Iraq, whose members routinely argue that, even as Petraeus and his surge achieve real progress, the home front has collapsed.

There is a kernel of truth here, but no more. Drawing the analogy to Iraq, Colonel Stuart Herrington (Retired) writes in Parameters, the journal of the Army War College, that "having wasted more than three years (until 1968) pursuing a flawed strategy, the Pentagon lost the support of the American population and was not given the time to get it right, even when it was clear that General Creighton Abrams' pacification and Vietnamization approach might have worked." Note here that Herrington does not blame the American public, but rather the three wasted years that collapsed its will. In Iraq, too, the Army wasted more than three years pursuing a flawed strategy — the difference being that, even now, it's not at all clear that what worked, or ought to have worked, in Vietnam will work in Baghdad.

Leave aside that South Vietnam boasted a relatively well-trained and certainly well-equipped array of security forces, while Iraq boasts neither. Indeed, leave aside all the ways in which South Vietnam during the early '70s compares favorably to Iraq today. At the end of the day, the United States lost the war in Vietnam. And, like in Iraq, it did so for reasons that go beyond the realm of public support. As in Vietnam, had the Army employed a suitable approach from the outset, it might have had a shot at winning the war in Iraq before losing it home. But, as the war grinds into its fifth year, charges of abandonment ring hollow.

So, yes, the proximate cause of America's exit from Iraq may turn out to be a collapse of will at home. And, yes, if Washington continues to ground its Iraq polices in political calculation and bogus posturing, it will have earned some of the blame for America's defeat. But, having studied the fate of Abrams for 30 years, today's military leaders knew full well the lesson of his cautionary tale: The wars that America loses at home tend to have been lost on the battlefield.

By Lawrence F. Kaplan
If you like this article, go to www.tnr.com, which breaks down today's top stories and offers nearly 100 years of news, opinion, and analysis