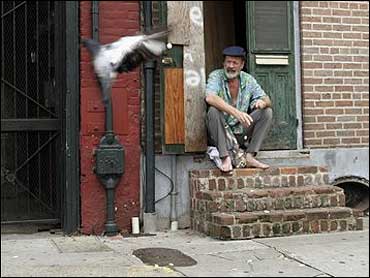 Areas of the city newly flooded by Hurricane Rita could be pumped dry again within a week after levee damage is repaired, far sooner than initially predicted, a U.S. Army Corps of Engineers spokesman said Sunday.

Workers dumped rock and sandbags into breaches in the city's Industrial Canal throughout the night and were expected to complete the repair Sunday, said Mitch Frazier, a spokesman for the corps.

The storm surge created by Rita eroded repairs made after Hurricane Katrina and sent water surging back into the already devastated Ninth Ward. Once the breach is closed, engineers now believe the area could be dry in a week, Frazier said.

Federal officials had said Saturday it would take two to three weeks to pump out the water delivered by Rita.

reports (video)
that the water level in the Ninth Ward had already dropped dramatically on Sunday, a day after Rita blew ashore along the Louisiana-Texas state line.

Despite that the still flooded Ninth Ward is void of residents, the sun was shining there Sunday morning, Alfonsi reports.

"It looks like the weather is improving," said Frazier. "That's good news."

The Corps of Engineers trucked rocks and airlifted giant sandbags to plug one of the ruptured levees, but the corps' commander on the ground was leery about how stable the makeshift repairs to the city's fragile flood-control system would prove.

"It's so dependent on the weather," said Col. Richard Wagenaar, the corps' district chief in New Orleans.

On Saturday, Mayor Ray Nagin renewed his delayed plans to allow some residents to return to the drier parts of the city. He said he thought the dry districts would eventually support a population of between 250,000 and 300,000.

Nagin said he wanted residents of the Algiers neighborhood, which has electricity and water, to start returning as early as Monday or Tuesday, followed by people in other ZIP codes.

"We're talking about people who are mobile. We're not asking people to come back who have a lot of kids, a lot of senior citizens," he said. "That's going to be the reality of New Orleans moving forward."

Even after the latest hurricane crisis eases, and downtown businesses along with French Quarter topless bars reopen, life in New Orleans will be far from normal. Among the somber distinctions: For months to come this will be an almost childless city.

Dozens of schools were irreparably damaged by Hurricane Katrina, and only a handful are expected to open before January. Few day-care centers will be available for preschoolers, and health experts warn that children are at extra risk of contamination if they come back before the city is thoroughly cleaned of the foul floodwater's residue.

"It's a big concern of ours," said the Rev. William Maestri, superintendent of the city's Roman Catholic schools. "We want our families back."

Until they do return, a whole sector of the economy will be in limbo — not only child care workers and teachers, but also pediatricians, owners of child-oriented stores and others. Numerous New Orleans teachers, faced with payroll problems and no work in their home city, are getting hired elsewhere.

By the tens of thousands, New Orleans' children are scattered around the United States, enrolling in schools, making new friends or — in some cases — getting into fights with the local students. Many of their parents want to return home when conditions allow, but many others say they may settle in their new locations, almost certainly producing a significant drop in New Orleans' population of children.

Arthur Johnson, a lifetime New Orleans resident, said one of his adult daughters evacuated and placed her four children in Texas public schools, where they were faring better than in their hometown school.

"We have bad schools here," he said. "We've been knowing that for years."

However, Coast Guard Vice Adm. Thad Allen, who is in charge of the federal disaster effort in the city, sounded a cautionary note Sunday about any return to New Orleans. The city can continue allowing business operators to return to unaffected areas of the city and letting residents return to the West Bank and the Algiers area, Allen said Sunday on ABC's "This Week."

"Where the mayor needs some thoughtful approach to is the areas that have been reflooded and the areas that may remain uninhabitable for safety, health and other reasons," the admiral said. "And I think a timetable associated with that still needs to be worked out."

The Corps of Engineers estimates the city's system of levees will not be completely repaired until June. With a month left in the hurricane season, there's no guarantee that another storm will not undo the next round of hard work to bring New Orleans back to life.

Elsewhere in the city, flooding continued from lesser levee problems, heavy rain and Lake Ponchartrain, which lapped over the seawall on Friday and remained above its normal level.

The renewed flooding in the Ninth Ward brought a stoic response from many locals helping to clean up a pub on St. Charles Avenue.

"They need to start getting people back into the city to do all the work that needs to be done," Neuell Griffith said.