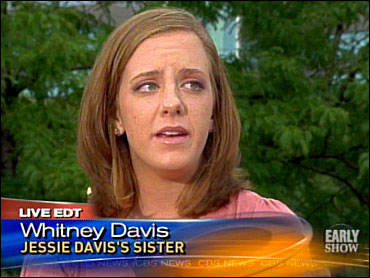 The tape was made by two of Ferguson's hostages, a husband and wife. The man was a supervisor at the security company from which Ferguson had been suspended for vandalizing his ex-girlfriend's car. She also worked at Burns Security.

Authorities say Ferguson shot the man to death and told the woman to leave and take the videotape to police, even though he had promised to release the man.

He also killed his ex-girlfriend, three other former co-workers, and himself.

On the tape Ferguson talks about killing police officers and going after more Burns employees.

"I've taken four victims," he said on the tape. "That should be good enough to last a week on the news."

He also apologized to the families of his victims, reports John Baird of CBS affiliate KOVR-TV. He also said he would either die in a shoot-out with police or "pop himself."

The former security guard shot himself to death after a high-speed chase and police shootout Monday, capping a weekend of violence that followed another Sacramento rampage three weeks ago.

Ferguson, 20, led officers on a 40-minute chase in a stolen car, shooting an officer and a bystander during the pursuit, said Sacramento County Sheriff's Capt. John McGinness.

Nikolay Soltys is a Sacramento resident charged with seven counts of murder in the deaths of six family members and his unborn child last month.

The chase began after Ferguson claimed his fifth victim late Sunday, police said. Ferguson exchanged fire with officers during the chase, then smashed into a light pole in front of a fast-food restaurant, police said.

Ferguson remained sprawled in the car while authorities waited, and when they approached they found he had shot himself, McGinness said.

A bystander shot in the stomach during the chase was in serious to critical condition Monday. A highway patrol officer was in good condition with a gunshot wound to the arm, authorities said.

Authorities say Ferguson was upset about breaking up with his girlfriend and getting suspended from his job with Burns Security a week earlier. His ex-girlfriend, also a Burns employee, and three other former co-workers were amon the victims.

While holding the fifth victim, a Burns supervisor, and his wife hostage for 12 hours Sunday, Ferguson made a video in which he foresaw his fate, McGinness said.

"He described a very violent plan of attack on innocent victims," McGinness said. "He said if cornered he would take his own life and that's exactly what he did."

Ferguson had been suspended from Burns last week after his ex-girlfriend reported he vandalized her vehicle.

Burns employees were evacuated from their homes Sunday and escorted to a "safe place," said police Sgt. Daniel Hahn. About 150 employees were pulled off the job for their protection.

Authorities did not immediately know why the supervisor was not taken to the safe place.

Ferguson allegedly began the shooting spree late Saturday, killing two people at an equipment yard and another two at a nearby marina. Three of the initial victims were Burns Security guards.

He then handcuffed another former co-worker to a tree at the Sacramento Zoo and fled in her car, police said. Officials evacuated other Burns employees out of fear for their safety.

Investigators were looking into the possibility that race might have played a role in Ferguson's selection of victims. One of the dead was black and another was Asian. Police discovered an assortment of white supremacist paraphernalia at his home.

It was the second deadly rampage in Sacramento in three weeks.

On Aug. 20, Soltys, 27, allegedly slashed his pregnant wife's throat, then killed his aunt and uncle and their two 9-year-old grandchildren in Sacramento. Authorities say he fled with his son, who was found dead in a cardboard box a day later. He was captured 10 days later in his mother's back yard .

Police said Ferguson told acquaintances in cell phone calls during the shooting spree that he was plotting an even bigger blood bath.

Ferguson said "he was going to outdo Soltys, something along those lines," said Sacramento Police spokesman Sgt. Daniel Hahn.

The suspect lived with his father and had no criminal record, authorities said. His mother is in prison after being convicted of molesting Ferguson and his siblings, McGinness said Monday.

In a search of Ferguson's home, police found a cache of weapons, including two shotguns, two assault rifles, two revolvers, a ballistic helmet, a flak jacket and a gas mask.