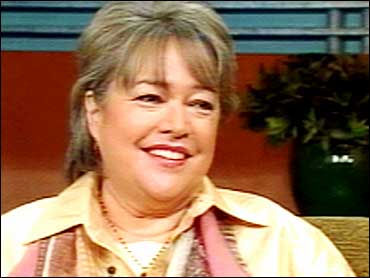 In a career full of critical raves, Kathy Bates received Hollywood's highest honor, the Academy Award, in 1991 for her chilling portrayal of a novelist's psychotic "number one fan" in "Misery".

This year, she is being mentioned for another Oscar for her Golden Globe nominated performance in the comedy "About Schmidt."

Bates portrays Roberta Hertzel, mother of Warren Schmidt's future son-in-law. She is a divorced, sex-crazed woman who considers herself an artist.

"I like to say she leads with her pelvis," said Bates on The Early Show. "That's sort of where I started with the character. Roberta reveals a lot more of herself than anybody wants to ever know about her at the drop of a hat."

"We had a lovely time. I can't describe what it's like to work with him.
He's a really hard-working, down-to-earth actor, and he does his job," she said. "I mean, you know, I guess I was expecting an entourage and, you know, all kinds of b.s., but he's just the opposite from that."

There is one scene in particular where her character bares it all in a hot tub with Nicholson and he can barely stand to be there, Bates said she had a drink before filming that scene.

"I was advised by my manager, I've been with 20 years, Susan Smith said, 'Why don't you have a cosmopolitan before you get in the tub, just to take the edge off.' It actually helped a lot," Bates said.

Bates also has made her mark directing.

"I had an opportunity to go and meet this wonderful television producer Stan Margulies on a project for A&E," Bates said. It was "Dash & Lilly," about Dashiell Hammett and Lillian Hellman for which she was nominated for an Emmy for Outstanding Directing for a Miniseries or a Movie.

"I went in and I had to pitch. You know, it was like an audition. And I hadn't done that in years. So I really felt like I was starting at the bottom, working my way up. And in a way I feel like I'm still doing that. I've been very fortunate to work on "Six Feet Under," the HBO show, and a lot of the actors there are theater actors. So it's been a very comfortable place for me," Bates said.