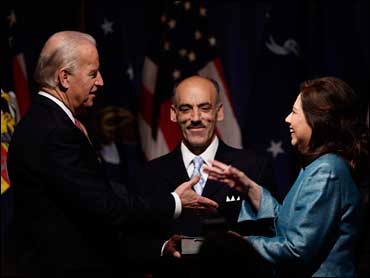 (AP)
What is it with this administration's top officials that they have so much trouble taking an oath of office?

We heard another fumble again this morning at the ceremonial swearing-in for Secretary of Labor Hilda Solis.

Vice President Joe Biden administered the oath – reading it from a card. Solis repeated line after line until Biden said: "...of the office upon which I'm about to enter."

Solis, obviously nervous, said "...upon which the office I'm about to enter."

Close – but no cigar.

Today's swearing-in was for show only. She was sworn-in for real the day of her Senate confirmation February 24th.

In her remarks, Solis served notice that she aims to be protector-in-chief of the nation's workers.

"To those who have for too long abused workers, put them in harms way, denied them fair pay – let me be clear: there is a new sheriff in town."

Her audience of department employees responded with a standing ovation.

Earlier, Biden took a veiled swipe at Solis' predecessor Elaine Chao – who served as labor secretary throughout the Bush Administration.

Again and again, he said Hilda Solis will demand to be heard. "Why do I repeat that phrase," he asked, "We have not heard much from this department in a long time."

As for being sheriff, not only does Solis claim title to that role, but last week, President Obama pinned a rhetorical badge on Biden – assigning him the task of overseeing expenditures from the $787-billion economic stimulus package.

"To you, he's Mr. Vice President, but around the White House, we call him the sheriff," said Mr. Obama.

It seems this town is big enough for two sheriffs.