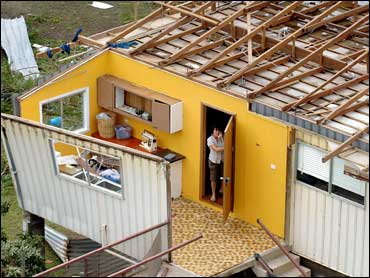 Forecasters warned that a Category 2 cyclone was heading for Australia's eastern coast on Tuesday just as residents took stock of devastation wreaked by what officials said was the most powerful cyclone to hit the country in three decades.

Wati was heading for an area several hundred miles south of the region hammered this week by Cyclone Larry, a Category 5 storm that lashed Australia's eastern coast with winds up to 180 mph.

Larry carved a path littered with debris and destruction. Metal roofs littered streets, wooden houses lay in splinters and banana plantations were stripped bare. Officials estimated that it caused hundreds of millions of dollars in damage.

Troops began moving aid to the cyclone-shattered town of Innisfail on Tuesday as residents picked through waterlogged streets littered with rubble and mangled roofs.

Trucks carrying soldiers rumbled through the streets of Innisfail, the town of 8,500 that bore the brunt of category-5 Cyclone Larry when it slammed into the coast of northeast Australia just before dawn Monday.

"The federal government will give what is needed to get these communities back on their feet," Howard said in a radio interview. "We just need a day or two to make a proper assessment of how the money can best be spent."

"In the southern part, there's blockages, both in terms of water and the sewerage blockages as well," Beattie later told the Nine Network.

The town urgently needs accommodation for people whose homes were damaged, a power supply to feed hospitals and other infrastructure, Clarke said on Monday.

There was no official count of the homeless, but given the number of homes badly damaged, the figure could run into the thousands, Clarke said.

The casualty toll was so low because people left town or went to shelters after authorities posted warnings. Residents and officials were mindful of the damage Hurricane Katrina did to New Orleans and Mississippi last August, said Ben Creagh, a spokesman for Queensland state Department of Emergency Services.

"There was absolutely no complacency at the planning level at all, and I think that shows. ... Good planning, a bit of luck — we've dodged a bullet," he said.

Black Hawk helicopters were expected to start flying over the stricken region Tuesday, assessing damage and carrying out rescues if necessary.

Farmers were among the hardest hit. The region is a major growing region for bananas and sugar cane, and vast tracts of the crops were flattened.

President of the Australian Banana Growers' Council, Patrick Leahy, said he faced at least six months without an income after Cyclone Larry destroyed his banana crop.

Also hit was the World Heritage Listed Great Barrier Reef, a tourist magnet that draws nearly 2 million visitors each year. Hundreds of tourists and thousands of residents hunkered down inside resort hotels and homes as the cyclone smashed into the coast, reports CBS News.

The storm was the most powerful to hit Australia since Christmas Eve 1974, when Cyclone Tracy destroyed the northern city of Darwin, killing 65 people.