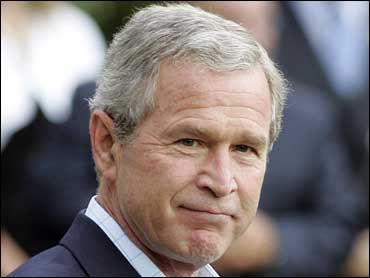 
After a disastrous two weeks, President Bush took pains this week to deal with his own political recovery as well as that of the Gulf region. In the wake of the worst poll ratings of his presidency, he launched a massive PR offensive that included some old reliables – a big primetime speech in a dramatic setting and a return to the National Cathedral. And he added a few new touches – he fired someone he liked, admitted mistakes and launched an expensive federal domestic spending program.

But will all this work? Continuing the baseball metaphor used by Judge John "the Ump" Roberts, I asked Republican and Democratic political strategists whether President Bush's season is over or whether he has just been going through a summer slump.

They all agreed on one big point: the president is in a heap of political trouble. But they offered different points of view on his ability to come back and the impact it will have on the 2006 elections.

Republican pollster David Winston says that the speech and plan to rebuild the Gulf region offer the president an opportunity to recover, to demonstrate he can govern and to convince people that he and his administration are effective.

Winston says the partisanship that emerged following Katrina made it strikingly different from the period following 9/11. "It made people feel very bad about things and dragged down everyone involved." But, Winston said, "Americans have a natural sympathy toward the victims and want to make things right." He added that prior to the hurricane the administration was struggling with gas prices and this actually will give them the chance to show they can govern. "This could produce a very positive reaction and the president may be able to reestablish confidence," he said.

Other Republicans were not as bullish, especially about the president's ability to recover politically any time soon, because of other factors working against him: Iraq, the economy and possible problems on big spending and tax reform. And they warn he may have trouble with the conservative base which is very wary of big federal programs. Oklahoma Sen. Tom Coburn has expressed real qualms about the extent of federal involvement and former House Speaker New Gingrich has called for an entirely new paradigm for transforming government services to restore the confidence of voters.

Democrats have been savoring the president's political problems but opinion is mixed on whether this will impact the 2006 elections. Democratic pollster Geoff Garin is very firm on the president's biggest problem: that he has lost credibility on his ability to fight terrorism. "By and large he has been a one-trick pony and now people aren't buying that trick," Garin said "In the absence of that he has nothing else. He has never been strong on domestic issues and he was elected and reelected by voters who had misgivings. The decline in his ratings wasn't due to the hurricane. That was just the last straw."

But even if President Bush isn't able to make a full comeback, the strategists aren't sure what impact that will have on the 2006 midterm elections. Garin makes the strongest case for this doing major damage to Republican candidates. "Paul Hackett's [the Democratic House candidate who almost won the Cincinnati special election in a very Republican district] success wasn't an accident. People are not in the mood to elect a rubber stamp Republican Congress," Garin said.

Democratic pollster Harrison Hickman says that President Bush is basically going through the "six-year itch" and was going to have a tough election even before the hurricane. Both he and Democratic pollster Diane Feldman predicted that the 2006 elections would turn not on the hurricane or President Bush's leadership but on economic and social issues which hit closer to home. Hickman says that "once the hurricane recedes from the headlines issues like immigration, which people live with every day, will still be relevant."

But across the board, the strategists agreed that all Americans care about the Gulf and are willing to make sacrifices to see the region rebuilt and the victims' suffering relieved. Whether President Bush can get his own "second line" remains to be seen.