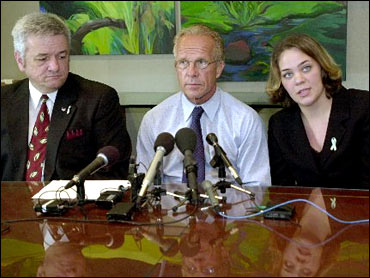 Like any mom, Heidi Meyer fixes boo-boos, serves up breakfast and even reviews some math homework.

But every day is a fight for this mom to overcome her past.

"Basically any way that he could put his hands on me, he did," she told CBS News Correspondent Jane Clayson.

From the time she was 10, until she turned 13, Heidi, a Jehovah's Witness, says she was molested by a member of her congregation. Finally, she turned to the leaders of her faith.

And what did they say?

"They asked me, do you think this could be a misunderstanding? And I said, no. No, I'm very sure of how his hands were on my body and there's no way to misunderstand that," Meyer said.

Bill Bowen, an elder for more than 20 years explained, "Anything that an elder says is viewed as the direct word of God."

Bowen, a former Jehovah's Witness went on, "You could even be excommunicated for questioning what an elder tells you to do. There's no negotiation here. You must obey what the elders direct."

But what silences most victims is that Jehovah's Witnesses require either a confession or two eyewitnesses to any accusation -- making sexual abuse almost impossible to prove.

For Leanna Morley, in Oregon, the abuse started when she was five.

"It's time that the people knew about the secrets that happen in that religion," she said. "It was a living hell."

Sue was seven years old and living in Washington. Her molester later made a chilling confession. He said there were 24 to 42 little girls that he had molested -- he couldn't remember how many exactly.

Bill Bowen says by the end of the year he expects at least 100 lawsuits to be filed against the faith.

The problem is huge, he said. "It's of global proportions. You're talking about tens of thousands of children who've been molested in the last ten years. Tens of thousands, easily."

The Jehovah's Witnesses Headquarters disputes these numbers but says they're aware of the problem -- and cites a letter it published last May. It says "we have long instructed elders to report allegations of child abuse to the authorities where required by law to do so, even where there is only one witness."

There is another letter. It denies Heidi Meyer's charges, saying "... no child abuse involved."

For Heidi, it's another betrayal by a faith she trusted and turned to for help.

"These are your spiritual leaders, these are men appointed by God in the eyes of Jehovah's Witnesses, and who was I? You know, I was just some kid."

As a mom she's still fighting to overcome her past -- even choosing to home school her son because she's afraid to leave him with others.