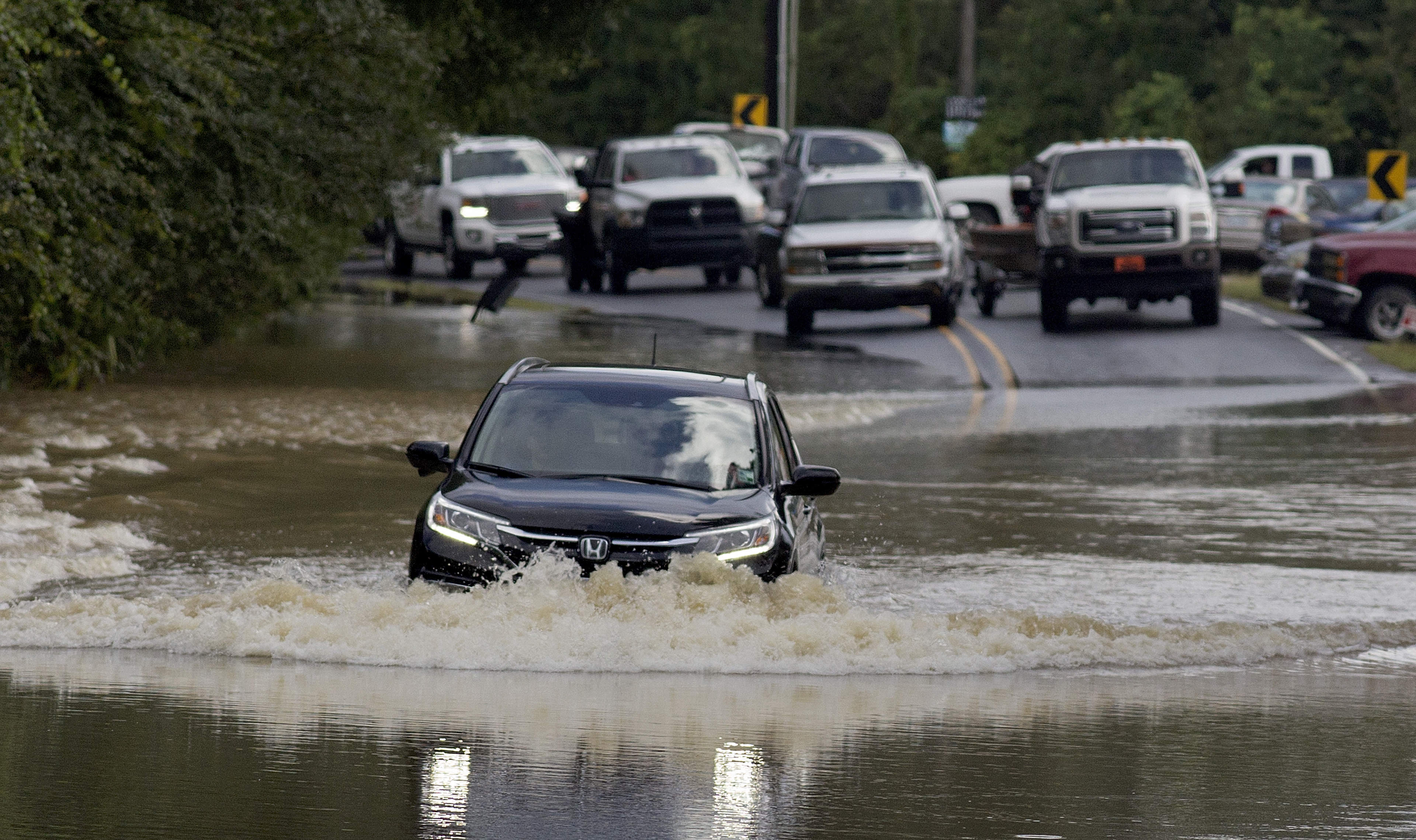 BATON ROUGE, La. -- An act of God is how some are describing it, a catastrophic 48-hour torrent of rain that sent thousands of people in Louisiana scrambling for safety and left many wondering how a region accustomed to hurricanes could get caught off guard so badly.

At least seven people have been killed and more than 20,000 have had to be rescued since Friday in some of the worst flooding the state has ever seen.

A seventh body was pulled from floodwaters Monday, said Casey Rayborn Hicks, a spokeswoman for the East Baton Rouge Parish Sheriff's Office. A volunteer patrolling in his boat found the body, and sheriff's units confirmed the discovery.

The East Baton Rouge Parish coroner confirmed that the death was flood-related, saying the victim, a man believed to be in his 50s, accidentally drowned.

As of Monday, the rain had mostly stopped, but rivers and creeks in many areas were still dangerously bloated and new places were getting hit by flooding. In areas south of Baton Rouge, people were filling sandbags, protecting their houses and bracing for the worst as the water worked its way south. In Ascension Parish officials said some small towns have already been swamped by floods.

More than 11,000 people were staying in shelters, with a movie studio and a civic center that usually hosts concerts and ballets pressed into service.

"It was an absolute act of God. We're talking about places that have literally never flooded before," said Anthony "Ace" Cox, who started a Facebook group to help collect information about where people were stranded. He was in Baton Rouge to help his parents and grandparents, who got flooded out.

"Everybody got caught off guard," he said.

Forecasters said one reason was the sheer, almost off-the-charts intensity of the storm and the difficulty of predicting how bad it would be.

Meteorologist Ken Graham of the National Weather Service's office in Slidell said forecasters alerted people days in advance of the storms. The forecasts Thursday were for 8 inches of rain, with higher totals expected in some areas.

But Graham emphasized that forecasting exactly how much rain is going to fall and where is nearly impossible. "It's one thing to say we're getting set up for a lot of rain. It's another thing to say where is this going to be," he said.

Two men on a boat pulled a woman from a car that was almost completely underwater, according to video from CBS affiliate WAFB, as floodwaters swept across Louisiana on Saturday.

The woman, who is not initially visible on camera, yells from inside the car: "Oh my god, I'm drowning."

One of the rescuers, David Phung, jumps into the brown water and pulls the woman to safety. She pleads with Phung to get her dog, but he can't find it. After several seconds, Phung takes a deep breath, goes underwater and resurfaces -- with the small dog.

Both the woman and the dog appeared to be okay

A north Louisiana firefighter who traveled to Baton Rouge to help with flood rescue efforts is believed to have accidentally discharged his weapon, wounding another firefighter, officials said, CBS affiliate WAFB reported.

Investigators say the bullet first hit a boat and then hit the fireman. Both firefighters are from Bossier Parish. The incident happened Monday night. No further information was immediately released. The firefighter is alive, but his condition is unknown, WAFB reported.

Some areas, such as the town of Zachary, received more than 2 feet of rain in a 48-hour period that ended Saturday morning. Another hard-hit area, Livingston, got nearly 22 inches over the same stretch.

Those rainfalls sent river levels in the region to historic highs -- in some cases shattering the old records mostly set during the 1983 floods.

Unlike in a hurricane, when shelters are established well in advance by parish governments and the Red Cross when the threat becomes obvious, shelters for those driven from their homes by the flooding were set up more haphazardly by parish officials.

As the scope of the disaster became clear, churches, schools and other places opened their doors to take evacuees. Shelters filled up so fast that some people had to sleep on the floor Saturday night because not enough cots had arrived. And some shelters had to shut down when they, too, started to take on water.

Marc and Crystal Matherne and their three children loaded up their cars with their three dogs and drove out of their flooded Baton Rouge neighborhood Sunday before the water got too deep to pass.

After a night in the shelter, Marc Matherne planned to head back to see if he could help stranded neighbors. His wife said she felt pangs of "survivor guilt," knowing that their home was probably still dry while so many neighbors had flood damage.

"I want to blame somebody because of all the hurt that's going on, but I don't know if anybody knew" how bad the flooding would be, she said. "It just seemed like a normal event for us, but it wasn't."

Volunteers have been dropping off supplies and food like jambalaya or red beans and rice at shelters. They have also been going out in boats -- locally referred to as the "Cajun Navy" -- to rescue people, supplementing the efforts of National Guardsmen, state officials and Coast Guardsmen in high-water vehicles, boats and helicopters.

"But I'm very proud of the effort that we're making. More than anything else, I'm proud that Louisianians are taking care of their own and people are being neighbors to one another," he said, stressing that search and rescue operations were still ongoing.

"You've got all of these people who hunt and fish who have more experience than the average first responder," he said.

But going out on the water carries dangers, too.

Lt. Davis Madere of the Louisiana Department of Wildlife & Fisheries, who spent days rescuing people and their animals, said the floodwaters are a potential minefield of submerged vehicles, fences and mailboxes that can trip up boats.

Above the water, he said, snakes trying to escape the deluge have been spotted in trees, and rescuers must be careful of power lines that are close overhead because the water is so high.

"What they're trying to do is prevent overzealous people from getting stuck themselves. We've had a couple of examples of that," Bush said.

The slow-moving, low-pressure system moved into Texas, but the National Weather Service warned there is still a danger of new flooding, as the water works its way toward the Gulf of Mexico.