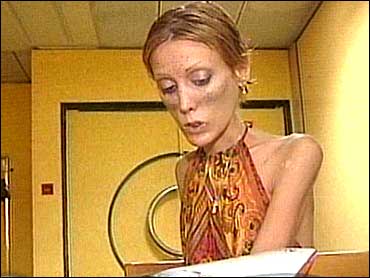 Upon meeting Isabelle Caro, the first thing that is apparent is her frailty. She is so tiny that she sways with a gust of wind.

Last month, stripped bare, she was the shocking face of an Italian campaign against anorexia. But the billboard that stunned the world does not even depict Caro at her thinnest. Now she says when she looks in the mirror, she realizes that she is dangerously thin and wants to get better.

"A skeleton. I see a skeleton. But one on the road to recovery," she told CBS News correspondent Sheila MacVicar.

Caro's anorexia began when she was 13. Her mother, she says, was seriously depressed and her father was largely absent. She spent her childhood in isolation, home schooled and kept away from others.

"I had a very complicated childhood, very difficult, very painful," she said. "My mother's big phobia was that I would grow. She spent her time measuring my height. She wouldn't let me go outside because she'd heard that fresh air makes children grow, and that's why I was kept at home. It was completely traumatic."

Her trauma crystallized into illness as she watched her mother struggle with a 70-pound gas canister.

"She said, 'Do you know how heavy this is?' " Caro said. "I weighed 10 pounds more, and I kept thinking 'I'm heavier than that heavy gas cylinder so I am a burden on my mother.' And that's when I thought about wanting to lose weight, to stop my growth. I dropped to about 58 pounds. My meal was reduced to two squares of chocolate and five cornflakes. That's all I ate all day."

Eighteen months ago, at 55 pounds, Caro collapsed into a coma. After that, she finally understood the truth about anorexia. It is a serious mental illness that kills more than 10 percent of sufferers. She decided she wanted to live, and accepted help. She now weighs 70 pounds.

"I know that it will take time, but I would rather go slowly and surely rather than gain weight rapidly and then fall back into losing it again," she said. "I have to get used to how I look with more weight."

To walk with Caro on the street is to begin to understand how others react to her, their shocked looks, even the stares. She has been accused of being a heroin addict.

"I have suffered enormously from the way people look at me," she said. "When I first moved to Marseille, nobody spoke to me, people stared at me. I stopped going out of my house. In cafes and bars they refuse to serve me. And that's why I refused to talk about it for such a long time. I was so afraid of people judging me. People just think you just stop eating but that is not what anorexia is. You don't just decide from one day to the next to stop eating. It's very hard. It's real suffering, and it goes deep."

But with intensive and continuing psychiatric help and good medical care, Caro is making progress. She's beginning to have enough strength to set goals and think about the future.

"I really want to have a child," she said. "And I hope my body will allow me to. My doctor says it's possible. I'm still not having periods -- my body is too weak -- but he says it is possible. Then for a relationship. I don't know yet. I'm with somebody now. I don't want to say very much because it's a bit complicated. At the moment it's more an affair of the heart than a physical relationship because, simply, I'm still very thin and it's still very difficult to enjoy normal physical relations with such a tiny body and a man who is a normal size. I'm still nervous about having sex."

For the first time in a long time, Caro has dreams and goals. The top ranked drama school in France, where she studied, has agreed that she can return to class. She intends to pursue the theater, but she has more pressing concerns.

"First of all, to be able to live," she said. "And to send the message that life is beautiful and it is worth living. You can get better by fighting and believing and by living your passion. And the theatre is my passion and I hope to be able to realize my dream to continue with that passion."