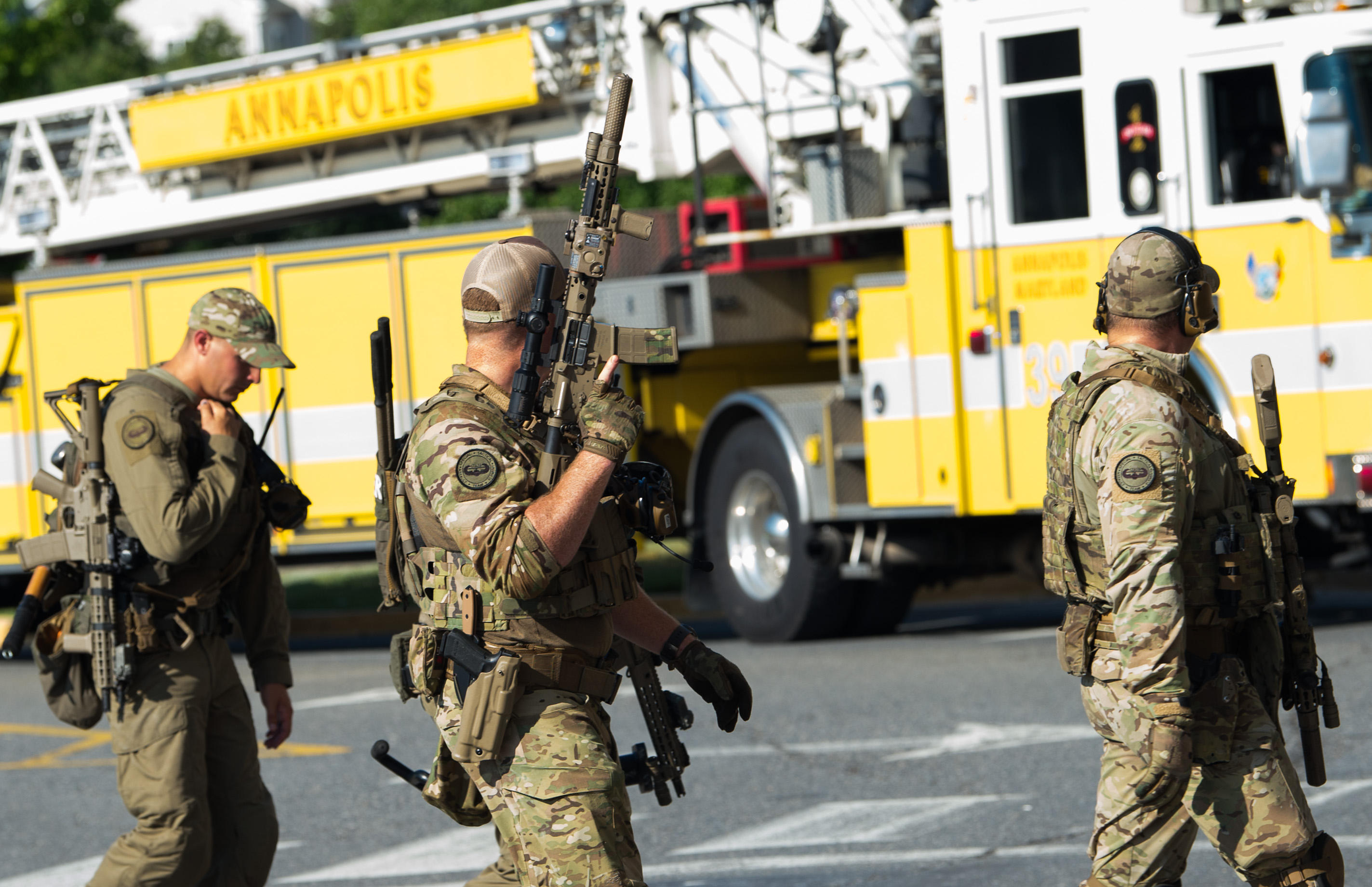 ANNAPOLIS, Md. --  A man with a long grudge against Maryland's capital-city newspaper was ordered held in jail Friday on five counts of first-degree murder after police said he blasted his way into the newsroom with a pump-action shotgun, killing five people in one of the deadliest attacks on journalists in U.S. history.

The suspect in the deadly rampage barricaded the back exit of the offices so as to prevent victims from escaping, according to a prosecutor. Wes Adams made the statements during a court hearing Friday morning. Judge Thomas Pryal said Friday that he found a likelihood that the suspect Jarrod Ramos is a danger.

Ramos, 38, was swiftly arrested as he tried to hide under a desk Thursday afternoon at the Capital Gazette in Annapolis, police said.

Adams said Ramos carefully planned the attack, using "a tactical approach in hunting down and shooting the innocent people."

There was one person who attempted to escape, and was shot and killed by Ramos, the prosecutor said. Adams also alleged Ramos planned to escape, but that plan was thwarted when police arrived.

"The fellow was there to kill as many people as he could kill," Anne Arundel County Chief Timothy Altomare said.

Ramos was "uncooperative" with his interrogators, police said, and in court papers, authorities described him as "recalcitrant."

Ramos appeared in an Annapolis courtroom via video feed. He appeared to watch attentively during the hearing but never spoke. He was dressed in blue detention clothing.

Pryal, the judge, was told Ramos has been put on suicide watch. Pryal also was given details about the suspect. The 5-foot-10 Ramos is single, with no children. He has lived in Maryland most of his life, including for the past 17 years in an apartment in Laurel, Maryland.

Police said surveillance video recorded the attack, which began with a shotgun blast that shattered the glass entrance to the open newsroom. Journalists crawled under desks and sought other hiding places, describing agonizing minutes of terror as they heard his footsteps and the repeated blasts of the weapon.

Officers swiftly responded and arrested him without firing a shot, police said. They recovered a gun and said he also carried smoke grenades. Some 300 local, state and federal officers converged on the scene, Altomare said.

The "bad guy" was identified quickly with help of facial recognition technology, Altomare said, refusing to give Ramos the satisfaction of using his name. The chief said the weapon was a 12-gauge pump-action shotgun, legally purchased about a year ago.

He said investigators have executed a search warrant on the suspect's home and uncovered evidence indicating he had planned the attack.

Altomare wouldn't detail what investigators found, but said they did not uncover a written manifesto.

Ramos had a well-documented history of harassing the paper's journalists, a feud that apparently began over a column about Ramos pleading guilty to harassing a woman. He filed a defamation suit against the paper in 2012 that was thrown out as groundless, and he repeatedly railed against its staff members in profanity-laced tweets.

Ramos so routinely sent profanity-laced tweets about the paper and its writers that retired publisher Tom Marquardt said he called police in 2013, telling his wife at the time, "This guy could really hurt us." A detective spoke with legal counsel for the Capital Gazette and several members of the Capital Gazette staff at the time, but the newspaper didn't wish to pursue criminal charges over "a fear that doing so would exacerbate an already flammable situation," Altomare said.

President Donald Trump said the attack filled Americans' hearts with grief. "Journalists, like all Americans, should be free from the fear of being violently attacked while doing their jobs," he said.