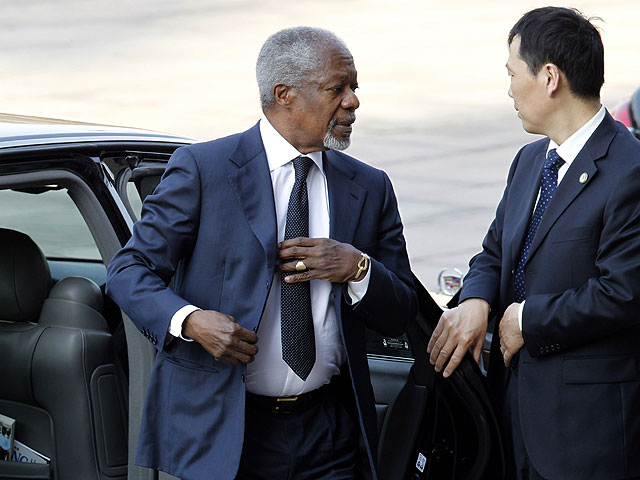 (AP) QAA, Lebanon - Syria has accepted a peace plan by U.N. envoy Kofi Annan that includes a government cease-fire, but the bloodshed persisted Tuesday as intense clashes between soldiers and rebels spilled across the border into Lebanon, officials said.

There were conflicting reports about whether Syrian troops physically crossed the border. Two Lebanese security officials said only bullets whizzed across the frontier into a rural, sparsely populated area around the Lebanese village of Qaa.

"There is no Syrian military presence on the Lebanese side of the border," the military official said.

But two witnesses in Qaa, who asked that their names not be published because of the sensitivity of the matter, said they saw dozens of troops enter Lebanon. One witness said the Syrian troops burned several homes.

An Associated Press reporter at the scene could not verify that any houses were burned, however, as Lebanese soldiers had cordoned off the area. The border in the area is poorly demarcated, and residents pass into each country easily and frequently.

Any incursion into Lebanese territory would escalate a conflict over an uprising against President Bashar Assad's rule that already has caused regional tensions. As the conflict spirals toward civil war, there are concerns that the violence could cause a broader conflagration by pulling in neighboring countries.

The U.N., meanwhile, raised its death toll for the year-long conflict to more than 9,000. Robert Serry, U.N. special coordinator for the Middle East peace process, gave the number Tuesday while briefing the U.N. Security Council on the Israeli-Palestinian peace process.

The Syrian uprising, which began last March with mostly peaceful protests against the regime has turned increasingly militarized after the government swiftly unleashed its military tanks, snipers and machine-guns to break up protests, which many opposition members say drove them to take up arms.

A diplomatic push to end the crisis has largely failed, but Ahmad Fawzi, a spokesman for Annan, said Tuesday that the Syrian government has accepted the envoy's six-point plan to end the bloodshed. The plan includes a cease-fire and inclusive talks about a political solution.

Louay Safi, a U.S.-based member of the opposition Syrian National Council, said the regime has accepted other peace initiatives, but the violence always continues.

"We are not sure if it's political maneuvering or a sincere act," he said during an opposition conference Tuesday in Turkey. "We have no trust in the current regime. We would like to see some practical steps. We have to see that they have stopped killing civilians."

Rami Jarah, another opposition member at the Turkey conference, said Assad is trying to stall for time.

"The Syrian government is going to depend on propaganda as it has over the past few months — propaganda of armed terrorists," Jarah said.

The government denies that the country is facing a popular uprising, saying the revolt is being driven by terrorists.

Also Tuesday, Assad visited Baba Amr, a former rebel stronghold in the key city of Homs that became a symbol of the uprising after a monthlong siege by government forces killed hundreds of people — many of them civilians — as troops pushed out rebel fighters.

Homs has been one of the cities hardest hit by the government crackdown on the uprising that began last March. Assad's forces overran the rebel-held Baba Amr on March 1 but faced resistance from other districts.

In footage aired on Syrian state TV, Assad appeared relaxed as he pledged that Baba Amr would return "better than it was before." He was greeted by residents who shouted, "We are with you until death!"

The violent conflict in Syria has posed a serious challenge to Assad, but neither side has shown any sign of giving in. The opposition, riven by differences, has failed to present a united front against Assad, which has added to the chaos.

Syrian opposition leaders were meeting in Istanbul on Tuesday in an attempt to resolve their differences and reassure international backers who are frustrated by the lack of cohesion.

The meeting comes ahead of an April 1 conference in Istanbul at which Turkey, the United States and their European and Arab partners will discuss ways to further isolate and pressure Assad, as well as measures to support the Syrian opposition. Some reports indicate that the debate among dozens of countries will include whether the opposition Syrian National Council and affiliated groups should be declared as the sole, legitimate representative of the Syrian people.

A Turkish official, speaking on condition of anonymity, said that "if the majority of participants choose that, we'll do that."