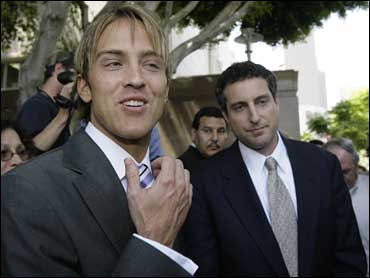 Former foes Larry Birkhead and Howard K. Stern sat side-by-side in a courtroom Tuesday as a commissioner admitted Anna Nicole Smith's will to probate and ordered that Birkhead, father of the late model's daughter, would be guardian of the estate while Stern serves as executor of her will.

The step begins a process in which Smith's assets will be identified and the court will determine how they should be distributed. The will left the entirety of her estimated $710,000 in assets to her now-deceased son.

Smith also noted in the will, "I have intentionally omitted to provide for my spouse and other heirs, including future spouses and children and other descendants now living and those hereafter born or adopted."

Beckloff said he will notify Smith's mother, Virgie Arthur, of his action in case she wants to intervene legally.

But a lawyer for Stern and the estate, Bruce Ross, said he believes Arthur has no standing in the case.

Smith gave birth to daughter Dannielynn in September, a few days before the death of her son, Daniel, 20, in the Bahamas. In February, Smith died at age 39 in Florida. Stern, her lawyer and companion, initially claimed to be Dannielynn's father, but Smith's ex-boyfriend Birkhead eventually showed he was the father and is now raising the child.

Outside court, Ross said he would eventually present testimony from the lawyer who drafted Smith's will, saying that Smith did not intend to disinherit Dannielynn.

"There is no provision in the will that names Dannielynn and purports to disinherit her," said the lawyer.

Ross said the attorney who drafted the will would testify that he and Smith discussed the possibility of her having future children.
"She said, 'I probably won't have future children, but if I do I would want them to be the beneficiaries of the trust,'" Ross said.

Asked why Smith made a provision to leave everything to her son and to specifically disinherit future children, Ross said, "Anna was concerned that someone would pop up out of the woodwork."

In an impromptu news conference, Stern and Birkhead said they were on good terms, that both are concerned for the welfare of Dannielynn and will do everything necessary to assure a good future for her.

"I'm going to help Larry any way I can," said Stern. "Larry will be a good father."

A smiling Birkhead said, "I have another new title today. In addition to father, I'm guardian. So it's a very good day."

He said he had a wonderful Father's Day with Dannielynn and added, "It's one I will remember."

Both men expressed hope that public attention would dissipate.

"Right now, Dannielynn is the most famous baby in America," said Stern. "Maybe five years from now it won't be that way and she can just be a normal little girl."

He added, "It's a relief to see a judge in America who's not interested in getting his own TV show."

Earlier in the day, the Florida judge who decided a dispute over Smith's remains announced plans to resign amid rumors he will have a TV judge show.

Stern also said he's been looking through mementos of Smith while he's been in California and he wished she could see her daughter. He said he will return to the Bahamas.

Birkhead, who had been a photographer, said he doesn't know what he is going to do for a career.

"You guys are always taking pictures of me, so I can't take pictures anymore," he said. "Maybe I'll go to law school."

He said of the baby, "She's my everything, and I'm making up for lost time."

Birkhead indicated he plans to live in Los Angeles unless the paparazzi attention makes it impossible.