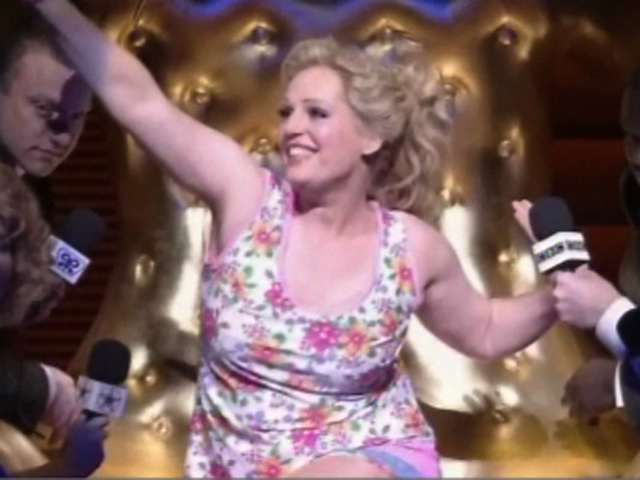 (CBS/AP/Reuters) Designer Vivienne Westwood and film directors Terry Jones and Mike Leigh were among the London audience at the opening night of "Anna Nicole" at the Royal Opera House.

The opera is based on the short, sensational life of Playboy Playmate-turned-tabloid-superstar Anna Nicole Smith and warns there will be "extreme language, drug abuse and sexual content."

Smith was just 39 when she died of an accidental drug overdose in February 2007, after a tumultuous life documented in magazines and tabloids, on reality TV and in testimony from a series of court cases.

The libretto is by Richard Thomas - who explained why he found Smith's life irresistible subject matter.

"I mean it's a very bleak tale, but it's also beautifully comedic," said Thomas. "There's an absurdity about her life that's very transcendental and beautiful and the opera is actually dedicated to her."

Thomas is also the co-creator of the controversial musical "Jerry Springer: The Opera."

The music for "Anna Nicole" is by Mark-Anthony Turnage - composer of the operas "Greek" and "The Sliver Tassie."

"We don't think of it as trashy. Maybe I'm trashy, but we don't think of her like that. It's quite a cruel word to use," said Turnage. "There's something quite special about her really. I think we've fallen in love with her after working on the show."