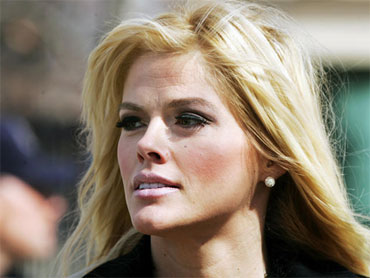 Rumors about Anna Nicole Smith being on the brink of losing her residency status and exhuming her son's body if forced to leave the Bahamas are simply not true, says her partner, Howard K. Stern.

In an e-mail sent to the television show "Entertainment Tonight" on Wednesday, Stern wrote that Smith "has never even discussed the possibility of exhuming Daniel's body."

Meanwhile, toxicology reports indicate that Daniel Smith had at least seven drugs in his system when he died on Sept. 10.

Pathologist Dr. Cyril Wecht confirmed to People magazine Tuesday that the antidepressant Amitriptyline, as well as two over-the-counter cold medicines, were found in Daniel's system along with methadone and the antidepressants Lexapro and Zoloft. Sources also told that magazine that a mild over-the-counter sedative was found in his body. But Wecht said the other medications played no role in his sudden death. As previously reported, his assertion is that Daniel was killed by the combination of Lexapro, Zoloft and methadone.

Stern, who Smith calls her husband in a new interview that airs Thursday night on "Entertainment Tonight," said Smith has no plans to leave the Bahamas and is not concerned about the dispute over the ownership of her waterfront residence, which was the basis of her application for permanent residency.

Local immigration authorities opened an inquiry following a claim by a South Carolina developer, G. Ben Thompson, that he owns the house.

"Anna Nicole is not concerned at all about her permanent residency status being revoked," Stern said.

Smith is recuperating from a bout of pneumonia that sent her to the hospital, complaining of pain in her side.

According to her lawyer, Walter Munroe, the 38-year-old former Playboy Playmate arrived Monday at Doctors Hospital, the same medical center where she gave birth to a daughter, Dannielynn Hope Marshall Stern, on Sept. 7. Her 20-year-old son died three days later while visiting his mother and sister.

"The impression I got is they took her in because her ribs were hurting, and then they discovered she had pneumonia," the attorney told The Associated Press.

Stern said Smith underwent a procedure Tuesday to drain fluid from a lung that had partially collapsed.

Daniel Smith died Sept. 10 in her room at Doctors Hospital, the only private medical center in Nassau, the capital of the island chain. A private medical examiner has said the cause of death was a lethal combination of methadone and antidepressants.

The results of official toxicology tests and a police investigation have not been released.