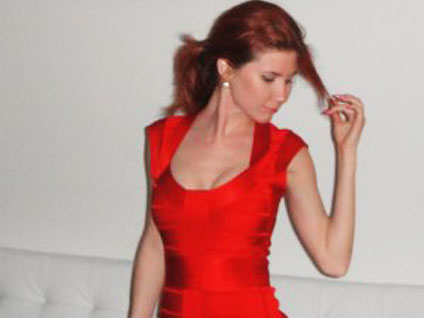 NEW YORK (CBS/AP) How did the FBI catch Anna Chapman, the woman dubbed the "femme fatale" of the alleged Russian spy ring accused of trying to infiltrate "policymaking circles" in the U.S.?

The complaint alleges that Chapman, 28, was using a specially configured laptop computer to transmit messages to another computer of an unnamed Russian official - a handler who was under surveillance by the FBI.

The laptop exchanges occurred 10 times, always on Wednesdays, until June, when an undercover FBI agent got involved, prosecutors said. The agent, posing as a Russian consulate employee and wearing a wire, arranged a meeting with Chapman at a Manhattan coffee shop, according to prosecutors.

During the meeting, they initially spoke in Russian but then agreed to switch to English to draw less attention to themselves, the complaint says, recounting their recorded conversation.

"I need more information about you before I can talk," said Chapman.

"OK. My name is Roman," the agent replied. "I work in the consulate."

The undercover agent said he knew she was headed to Moscow in two weeks "to talk officially about your work," but before that, "I have a task for you to do tomorrow."

The task: To deliver a fraudulent passport to another woman working as a spy.

"Are you ready for this step?" he asked.

"Of course," she responded, according to the complaint.

The agent gave her a location and told her to hold a magazine a certain way - that way, she would be recognized by a Russian agent, who would in turn confirm her identity by saying to her, "Excuse me, but haven't we met in California last summer?"

But Chapman was leery, prosecutors said.

"You're positive no one is watching?," they say she told the undercover agent after being given the instructions.

Afterward, authorities say, she was concerned enough to buy a cell phone and make a "flurry of calls" to Russia. In one of the intercepted calls, a man advised her she may have been uncovered. The complaint says he told her she should turn in the passport to police and get out of the country.

She was arrested at a New York Police Department precinct after following that advice, authorities said.

Authorities say the undercover's parting words to her had been, "Your colleagues in Moscow, they know you're doing a good job. So keep it up."

Suspected gunman in Mall of America shooting captured in Chicago
Thanks for reading CBS NEWS.
Create your free account or log in
for more features.
View CBS News In
CBS News App Open
Chrome Safari Continue
Be the first to know
Get browser notifications for breaking news, live events, and exclusive reporting.