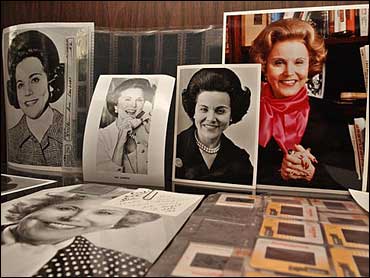 Ann Landers' desk, antique furniture and letters from presidents went on the auction block Sunday, along with her combat boots.

Landers, whose real name was Esther "Eppie" Lederer, died of multiple myeloma on June 22 at age 83. For four decades she had delivered snappy, timely advice on topics ranging from finances to broken hearts to sexuality.

Her daughter, Margo Howard, said she had no place to store all the treasures her mother had collected in her 16-room Chicago apartment.

"She saved basically everything she had, not only files and copies of correspondence with presidents and luminaries but her responses and her notes photocopied as well," said Levi Morgan, a spokesman for Butterfields auction house.

Lederer's property brought nearly $250,000 with many lots sold to Internet and phone bidders from across the country, according to Butterfields. Howard said the proceeds would go to Lederer's estate and to support multiple myeloma research.

She said the auction was a way to share history.

"Because of who she was I thought that people who wanted to have that kind of connection to her should have the chance," Howard said.

"She was America's mother, which took me awhile to come to terms with," Howard said. "She raised four generations of people. There are kids who grew up with her and they grew up and put on their kids' breakfast plates something she wrote."

Lederer began her column in 1955 at Chicago's Sun-Times, moving to the Chicago Tribune in 1987. In 1993, she was the world's most widely syndicated columnist, appearing in more than 1,200 newspapers worldwide with 90 million readers daily. Her twin sister, Pauline, followed her into the profession as writer of the Dear Abby column.

Among the lots up for auction were combat boots, fatigues and a notebook from Lederer's 1967 trip to Vietnam, where she visited soldiers and collected phone numbers. After returning home, she spent nearly four days calling soldiers' families to deliver greetings, Howard recalled.

Also up for bid are some of Lederer's home furnishings, including a pair of Italian neoclassical armchairs, a late 18th century sideboard, her Steinway piano and her collection of owl knickknacks. One of those, a rare print, brought $29,125.

About the only things not for sale were the letters Lederer received from readers. She took great care to destroy them in order to not betray identities, Howard said.

"She was a wonderful girl and a terrific mother and I miss her everyday," Howard said. "But I know that I was lucky to have had her all this time."