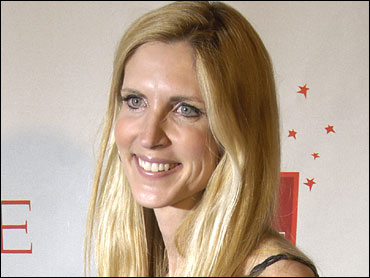 Coulter writes in a new book, "Godless: The Church of Liberalism," that a group of New Jersey widows whose husbands perished in the World Trade Center act "as if the terrorist attacks happened only to them."

She also wrote, "I've never seen people enjoying their husbands' deaths so much."

Clinton, who has felt Coulter's criticism over the years, responded on Wednesday.

"Perhaps her book should have been called 'Heartless,' " the senator said. "I know a lot of the widows and family members who lost loved ones on 9/11. They never wanted to be a member of a group that is defined by the tragedy of what happened."

The New York Democrat and former first lady said she found it "unimaginable that anyone in the public eye could launch a vicious, mean-spirited attack on people whom I've known over the last four and a half years to be concerned deeply about the safety and security of our country."

"I was really stunned and I don't think it's at all fair or accurate," Pataki said Wednesday in New York.

"I have spoken with many, many grieving family members and the hurt is real, the pain is real, the suffering four and a half years later has not lessened to any appreciable degree," he said.

Coulter appeared Tuesday on NBC's "Today" show, and stuck by her stance, saying the women used their grief "to make a political point."

Her criticism was aimed at four New Jersey women whom she dubbed "The Witches of East Brunswick," after the town where two of them live.

They have spent the years since the 2001 terror attacks supporting an independent commission to examine government failures before the attack, and in the 2004 presidential campaign they endorsed Democrat John Kerry.

The women, who are still pushing for changes in how the government guards against future attacks, issued a joint statement after Coulter's television appearance.

"We have been slandered. Contrary to Ms. Coulter's statements, there was no joy in watching men that we loved burn alive. There was no happiness in telling our children that their fathers were never coming home again. We adored these men and miss them every day," the women said.