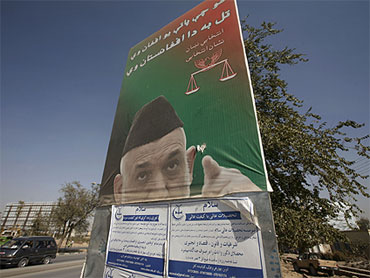 Actress Anjelica Huston was crowned Harvard's Hasty Pudding Woman of the Year Thursday, but only after much feigned comic confusion over whether she wasn't actually the singer Whitney Houston.

Huston received the award honoring top entertainers after the traditional parade through Harvard Square, accompanied by students dressed in drag.

Huston, 51, was introduced as Houston, and the confusion continued as a member of the Hasty Pudding Theatricals, an undergraduate dramatic organization, rushed onstage to reveal the mistake. She was asked to prove her identity, and earn the brass pudding pot, by participating in spoofs of her movies.

Huston received an Oscar for best supporting actress for the 1985 film "Prizzi's Honor." She has starred in films including "The Grifters" and "The Addams Family," and directed the critically acclaimed "Bastard Out of Carolina," a 1996 Showtime movie about child abuse.

Huston was asked to take part in a skit with an actor dressed in the distinctive red track suit Ben Stiller wore when he played Huston's son in "The Royal Tenenbaums."

She played along by feeding the actor from a bottle and singing him a lullaby - a monotone version of "I Will Always Love You," the Dolly Parton song made famous by Houston.

"I didn't expect to be on stage, otherwise I would have been more prepared," Huston told the audience. "I hope you all understand and know how incredibly proud I am to have this little melting pot."

Director Martin Scorsese is scheduled to be crowned Man of the Year on Feb. 13. Last year's recipients were Sarah Jessica Parker and Bruce Willis.