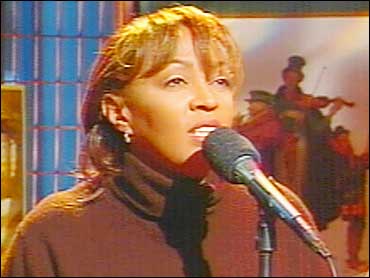 Anita Baker's Friday began with the threat of jail hanging over her.

It ended with the Grammy-winning R&B singer exiting a Detroit courtroom, smiling and excited to get her weekend started.

What made the 52-year-old Grosse Pointe resident so happy was that she and her lawyers were able to reach an agreement with her ex-husband's attorney to create a process that eventually will decide how much Walter Bridgforth is owed in music royalties as part of the couple's divorce settlement.

"I'm so happy. ... I have never been in such a position before," Baker said in the hallway outside court. "And we don't intend to ever be in such a position ever again. I just wanna go home, and I'm happy to go home. ... As horrific as it could have been, it was lovely to feel supported, though, on the other end."

Baker, best-known for hits such as "Giving You the Best That I Got," faced a deadline of this past Wednesday to sign documents to empower court-appointed music contract expert Howard Hertz to seek information from the record companies on the amount owed to Bridgforth.

But when that deadline passed and Baker again didn't sign Thursday, Wayne County Chief Family Court Judge Lita Masini Popke ordered the singer back to court Friday to sign or be jailed.

On Thursday, Popke said Baker had been uncooperative, and the singer complained of being "muzzled."

At Friday's hearing, Baker rose to speak under oath, telling the judge it was a "very stressful situation" to have to review the documents under the threat of jail.

After a recess, Popke relented, saying: "I'm not going to hold you in contempt or send you to jail today."

The judge then instructed Baker, her lawyers, Bridgforth's attorney Hanley Gurwin and Hertz to work out language acceptable to all parties.

The sides retreated to the jury room and returned later to inform Popke that they had reached a deal.

The agreement calls for Hertz to report back to the court by late April on his dealings with the record companies.

Everyone seemed pleased with the outcome, even the judge.

"Miss Baker, I thank you for your cooperation," Popke said. "I apologize for the stress that this obviously put on you, but I think we've reached a very successful conclusion and can move forward."

The royalties in question would come from two albums released during Baker's marriage to Bridgforth, who wasn't in court Friday.

His lawyer, though, was relieved to have the matter behind him for now.

"It wasn't easy," Gurwin said. "Obviously, it took us two days to get this done. But we did get it done."