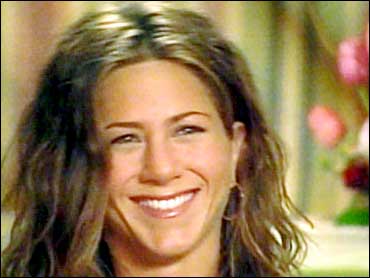 One of Jennifer Aniston's former flings is auctioning off letters, notes, pictures and other memorabilia from the "Friends" star.

Michael Baroni, a California lawyer who claims he had a summer romance in 1984 with Aniston, is selling keepsakes such as a makeshift birthday card she wrote on a piece of toilet paper and a childhood picture of the pair.

According to Baroni, their summer lovin' — he was 16, she was 15
turned into a longtime friendship until they lost contact in 1991, when Aniston's showbiz career began to soar.

"She was very fun and lively, a loving kind of person," Baroni told the AP during a phone interview Friday. "I think the materials show an innocent look into someone I think is very endearing."

Baroni's auction begins July 29 on eBay with a $100,000 reserve. If the reserve is not met, the package of memorabilia will be withdrawn. Baroni wouldn't comment on why he was auctioning off the items beyond citing "financial reasons."

The package includes: a piece of paper with Aniston's name and phone number written in lipstick, a love letter from Aniston handwritten in red pen, a note written on toilet paper with birthday wishes from Aniston to Baroni on his 17th birthday, a page from Baroni's little black book containing Aniston's contact information, a photo of the pair hugging when they first met in 1974, an autographed photo from the cast of "Friends," a December 2004 copy of In Touch magazine with an article about their relationship and a notarized statement by Baroni certifying and attesting to the authenticity of the materials.

In January, Aniston and her husband, Brad Pitt, separated after 4 1/2 years of marriage. She filed for divorce in March citing irreconcilable differences.

"I think she's very strong-willed, but at the same time, she gives her heart to whatever she does," said Baroni. "I'm sure the breakup was more his fault that hers."