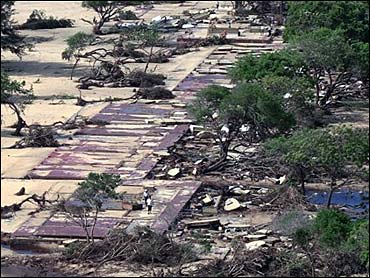 Wildlife officials in Sri Lanka expressed surprise Wednesday that they found no evidence of large-scale animal deaths from the weekend's massive tsunami — indicating that animals may have sensed the wave coming and fled to higher ground.

An Associated Press photographer who flew over Sri Lanka's Yala National Park in an air force helicopter saw abundant wildlife, including elephants, buffalo, deer, and not a single animal corpse.

Floodwaters from the tsunami swept into the park, uprooting trees and toppling cars onto their roofs — one red car even ended up on top of a huge tree — but the animals apparently were not harmed and may have sought out high ground, said Gehan de Silva Wijeyeratne, whose Jetwing Eco Holidays ran a hotel in the park.

"This is very interesting. I am finding bodies of humans, but I have yet to see a dead animal," said Wijeyeratne, whose hotel in the park was totally destroyed in Sunday's tidal surge.

"Maybe what we think is true, that animals have a sixth sense," Wijeyeratne said.

In one instance, a London-based woman told Britain's Press Association that a group of youngsters at a Phuket beach were saved when an elephant trainer placed them on the animal's back and led them to safety before the giant wave crashed ashore.

But there were few reports of miraculous escapes in Indonesia, where the official death toll stood at 45,268. Authorities there said that did not include a full count from Sumatra's west coast, where more than 10,000 deaths were suspected.