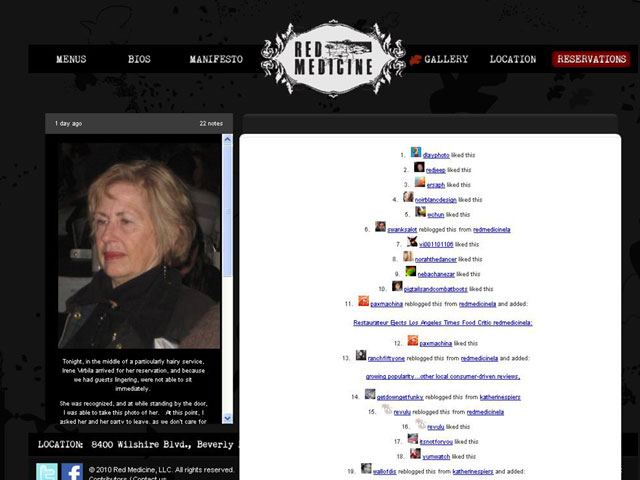 (CBS) It is a standard industry practice for food critics to strive to remain visibly anonymous. They do that, many say, so they are treated like any other customer when entering restaurants to review them.

For 16-year Los Angeles Times veteran S. Irene Virbila that may no longer be an option.

While waiting online Tuesday at Red Medicine, which opened in June and was described by LA Weekly newspaper as a place where "punk meets Vietnamese," Virbila was spotted by managing partner Noah Ellis.

Ellis snapped her picture, and then told her to leave. Later, he posted her picture on the restaurant's Tumblr blog, along with a lengthy note explaining his decision.

"I asked her and her party to leave, as we don't care for her or her reviews," Ellis wrote. "Our purpose for posting this is so that all restaurants can have a picture of her and make a decision as to whether or not they would like to serve her. We find that some of her reviews can be unnecessarily cruel and irrational, and that they have caused hard-working people in this industry to lose their jobs."

The motivation for booting Virbila and posting her picture online was not just retribution for her apparent wrongs against the Los Angeles restaurant scene, Ellis wrote.

"We're writing this to make everyone aware that she was unable to dine here, and as such, any retribution by her or on her behalf via a review cannot be considered to be unbiased," Ellis wrote.

Thus far, reactions have been mixed by those responding online.

As for the restaurant's overall actual quality, 49 people have reviewed it thus far on yelp.com, giving it an average rating of 2-and-a-half stars out of 5.