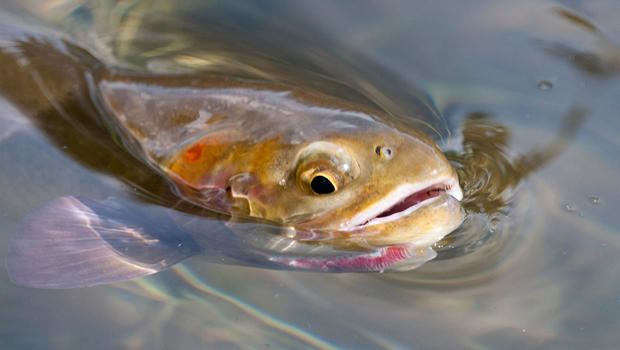 COPENHAGEN, Denmark  Danish anglers are rushing to a western Denmark fjord to catch some of the up to 80,000 farmed rainbow trout that have been accidentally released, hoping to keep them from upsetting the area’s ecological balance.

A cargo ship on Monday accidentally tore apart a fish farm net off Assens, 124 miles west of Copenhagen in the western Baltic Sea, setting free the entire trout farm, which was estimated to hold 250 tons of fish.

The incident is being investigated by the Danish Maritime Authority. It was not immediately clear whether the ship would be fined. Police say no one was injured when the ship sailed into the aquaculture farm.

But now authorities fear the farmed trout wreak havoc on the region and eat the eggs of other trout species. Soeren Knabe of the environmental group Vandpleje Fyn is urging anglers to “grab their rods and catch as many as possible. I’ll join them this weekend.”

“Get yourself a fishing license and get out there. The more the better,” he said jokingly.

Knabe said Wednesday that the rip happened “at the worst time” because sea trout “are about to spawn and their eggs are ‘yummy’ for rainbow trout.”

Kaare Manniche Ebert, a biologist with Danish Anglers’ Association, told Denmark’s TV2 that the farmed rainbow trout could very well die of starvation because they are used to being fed.

“In some streams, they will start eating the eggs of other trout species, and maybe the other trout. That will be a disaster,” he told TV2.