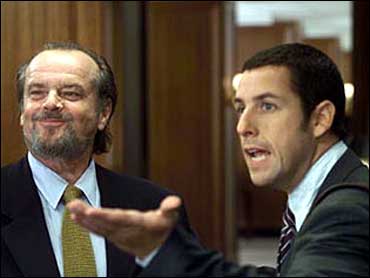 A few films opened stronger than expected this weekend, but they still couldn't shake Jack Nicholson and Adam Sandler from the top spot. Their film, "Anger Management,"lost 40 percent of its audience, but still took in $26 million.

Disney's family film "Holes," based on Louis Sachar's book about the adventures of juvenile delinquents forced to dig holes in a dry lake bed, debuted in the second spot with an impressive $17 million, reports The Early Show entertainment contributor Jess Cagle.

And despite tough reviews, "Malibu's Most Wanted," with Jamie Kennedy as a white rapper whose gangster demeanor cramps his father's political ambitions, came in third with a solid $13 million.

In narrower release, the comedy "Chasing Papi," about a ladies
man with three women on the line, opened at No. 12 with $2.21
million.

"A Mighty Wind," the latest "mockumentary" from director
Christopher Guest ("Best in Show"), nearly equaled the gross for
"Chasing Papi" while playing in fewer than a quarter as many
theaters.

With a 10-day total of $80.3 million, "Anger Management"
should hit $100 million by next weekend and does not face serious
competition from new films until May 2, when "X2: X-Men United"
opens, said Tom Sherak, a partner in Revolution Studios, which
produced "Anger Management" for Sony.

Good reviews for "Holes," along with the family-friendly
Easter weekend, helped draw parents and their children along
with a general adult crowd, said Chuck Viane, Disney's head of
distribution.

"`Holes' was sort of off the radar," said Paul Dergarabedian,
president of box-office tracker Exhibitor Relations. "But kids
know this book, and there's really no movies out there for kids
right now. Almost every time when there's a void in the marketplace
for family films, all of a sudden one pops up, and families rush
out."

"Chris Guest has created a real niche for himself in the hearts
of the moviegoing audience," said Dan Fellman, head of
distribution for Warner Bros., which released "A Mighty Wind" and
"Best in Show."

Warner plans to expand "A Mighty Wind" to about 600 theaters
by early May.

Here are the numbers according to Hollywood.com: