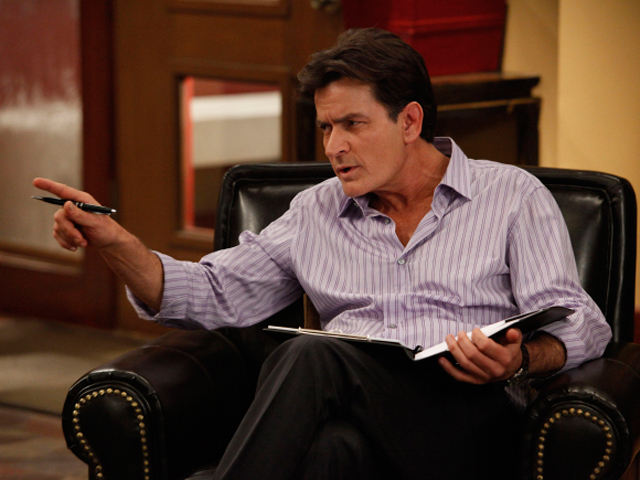 A lot of attention has been paid to the series, as it marks Sheen's first stab at a TV series since departing CBS' "Two and a Half Men" in 2011.

In the FX show, loosely based on the film of the same name, Sheen plays Charlie Goodson, a former ballplayer who becomes an anger management therapist.

In case anyone has forgotten how Sheen came to star on "Anger Management," the show addressed it straightaway.

The first words Sheen, as Goodson, said on the show were: "You can't fire me, I quit. You want to replace me with some other guy, go ahead! It won't be the same! You think I'm losing! I'm not! I'm-anyway, you get the idea..." (Of course, the character is not actually talking about Sheen's ousting from "Two and a Half Men" - he's speaking to an inflatable punching bag that he uses with his anger management patients.)

"Anger Management" also stars Shawnee Smith as Goodson's ex-wife, Danielle Bobadilla as his daughter, Michael Boatman as a neighbor and Selma Blair as his therapist and friend-with-benefits.

Blair told E! News she enjoyed working with Sheen. "We just got along and had a great time and instantly became friends," she said. "All you've ever heard about Charlie for work is, really, when he's there, he's there. I've never heard anything but wonderful things. I could use a little drama in my life. I was like, 'Bring it, Charlie!' but nothing."

According to FX, in next week's episode the new "evolved" Charlie has to deal with a ghost from his old carousing, baseball-playing days when an unattractive woman he slept with just to break a batting slump shows up as a new patient in group therapy.

Tell us: What did you think about "Anger Management"?