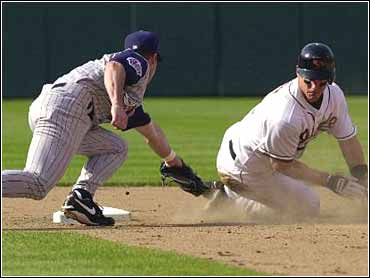 First, the Anaheim Angels ended a nine-game skid against the Baltimore Orioles. For an encore, they defeated nemesis Mike Mussina for the first time in five years.

Tim Salmon also homered for the Angels, who hit eight homers in winning two of three from Baltimore. After opening the series with a 7-6 loss, Anaheim scored a combined 14 runs in two straight wins.

"We had an opportunity to win that first game and we didn't, and we came back yesterday and won that game, and to win today, it's a good thing," Vaughn said. "So we're feeling pretty good."

Coming off a 138-pitch effort against Texas on Saturday, Mussina retired the first five batters. But he yielded five straight hits in the fourth inning and left in the fifth with Baltimore trailing 6-5.

"He's a tremendous competitor. He just wasn't totally on his game like he normally is," Vaughn said. "Even so, he can still make you look bad. We got some breaks, we got some hits off him and scored some runs."

Mussina wouldn't blame fatigue on his uncharacteristic performance. Rather, he said the Angels took advantage of his mistakes and managed to hit his good pitches, too.

Mussina, the staff ace, is still searching for answers to his poor start this season.

"I'm a little frustrated with the way I've been pitching," he said.

Brady Anderson homered for the Orioles, who have lost seven of 11. Baltimore got only two hits over the final five innings against Eric Weaver and Shigetoshi Hasegawa.

"Weaver and Hasegawa were the story of today's game," Angels manager Mike Scioscia said. "Those guys came in and put up four goose eggs. That's the reason we won."

Ken Hill (3-3) got the win despite giving up five runs in five innings. Hasegawa got the final six outs for his first save.

Anaheim's Darin Erstad, the AL batting leader, went 0-for-5 and failed to reach base for the first time in 28 games this season.

Spiezio singled in a run in the second before Baltimore batted around to go up 3-1 in the third. After B.J. Surhoff hit a bloop to right that fell for an RBI single, Albert Belle followed with a sacrifice fly and Harold Baines singled in a run.

Anderson hit a two-run shot in the Orioles' half to make it 5-5, but Anaheim again responded. Adam Kennedy opened the fifth with a triple and scored on a groundout by Vaughn.

One batter later, Mussina was gone.

"He certainly wasn't on top of his game like he usually is," Baltimore manager Mike Hargrove said. "He just didn't seem to have his location."

Salmon hit a solo homer and Benji Gil singled in a run in the eighth.

"I didn't think Mussina had his best stuff, but he's a challenge no matter what," Spiezio said. "That'why this was a big win for us."