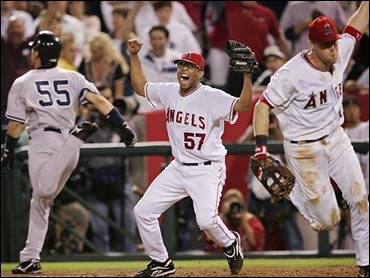 The Angels were down and their ace was out. In came a 22-year-old rookie with a defiant look in his eye and the season on the line.

Less than 24 hours after arriving in California, the Angels got ready to leave for the start of the ALCS against the White Sox in Chicago on Tuesday night.

George Steinbrenner's $203 million Yankees once again learned that money doesn't buy success. Even with Randy Johnson coming out of the bullpen for 4 1-3 shutout innings, New York was eliminated by the Angels in the first round for the second time in four seasons.

Just like last year, when the Yankees lost four straight against Boston after taking a 3-0 ALCS lead, Alex Rodriguez and Gary Sheffield were virtually invisible when New York needed their bats most. Rodriguez, New York's $252 million man, hit into a double play after the Yankees got their leadoff runner on in the ninth.

With two on and two outs in the ninth as the Yankees mounted one more threat, Francisco Rodriguez retired Hideki Matsui on a sharp grounder to first.

New York staved off elimination with a 3-2 victory Sunday night at Yankee Stadium, forcing one more game across the country in Anaheim. The teams traveled all night, both landing around 3:30 a.m.

Santana, who started the season at Double-A, entered after Bartolo Colon departed in the second inning with an injured shoulder. Santana got the win by allowing three runs and five hits, leaving to a standing ovation with one out in the seventh after allowing a leadoff homer to Derek Jeter.

Garret Anderson homered and hit a sacrifice fly, and Francisco Rodriguez got four outs for his second postseason save and second this series.

He allowed Jeter's third hit of the game starting the ninth and, after K-Rod got the double play on A-Rod, Jason Giambi singled to right and Sheffield reached on an infield hit.

Matsui grounded out to first baseman Darin Erstad, who made a diving stop and slipped the ball underhand to Francisco Rodriguez, who just beat Matsui to first for the final out.

The Angels threw their arms into the air in celebration and formed a group hug near first base, fireworks going off behind them beyond the outfield and streamers coming from the upper bleachers.

Bernie Williams, in perhaps his final game of a Yankees' career that began in 1991, went 0-for-3 with a walk, flying out to left in the eighth in what could have been his final at-bat in pinstripes.

Los Angeles advanced to its first ALCS since winning the franchise's first World Series title in 2002, and the Angels became the first team to eliminate the Yankees twice during manager Joe Torre's 10-year tenure.

The Yankees' best chance at a comeback against Santana was ended on a disputed call in the fifth inning. With runners on first and second and two outs, Robinson Cano swung at a third strike in the dirt. Cano ran to first and catcher Bengie Molina's throw got past first baseman Darin Erstad, apparently loading the bases for Williams. But plate umpire Joe West called Cano out for running inside the baseline, prompting an unsuccessful argument by Torre.

Kennedy insisted the Angels would get through this one on Adrenalin after the long flight — no need for the jumping rally monkey that shows up on the big screen at Angel Stadium in the late innings. The monkey showed up afterward to celebrate.

Anderson's second-inning home run off Game 1 winner started the comeback against Game 1 winner Mike Mussina after New York had scored twice in the top half.

Kennedy, the No. 9 hitter who was MVP of the 2002 ALCS, lined a triple to right-center with two outs in the second. Sheffield, in right, and center fielder Bubba Crosby collided hard and hit the wall trying to make a play on the ball. Both quickly jumped up to find the ball as two runs score for a 3-2 lead, and Crosby threw back in to keep Kennedy at third.

Torre and trainer Gene Monahan hustled out to check on Sheffield, and both players remained in the game.

After Orlando Cabrera and Vladimir Guerrero hit back-to-back singles to start the third, Anderson added a sacrifice fly that made it 4-2. Molina singled, and Erstad also drove in a run.

One out later, the 42-year-old Johnson relieved to face Steve Finley — the first relief appearance for the Big Unit since beating the Yankees in Game 7 of the 2001 World Series for the Arizona Diamondbacks.

Mussina lasted only 2 2-3 innings and 57 pitches for his shortest career postseason outing. The right-hander, who stayed in Southern California all week in case he had to pitch the decisive game, lost this one after pitching scoreless ball into the sixth in Game 1.

Colon, who returned to California on Saturday, got out of his first-inning trouble when he struck out Matsui with two on. But he threw just 23 pitches and was replaced by Santana, who hadn't pitched since winning 7-4 at Texas on Oct. 2, the final day of the regular season.

Santana had some control problems at the start and allowed an RBI single to Crosby and Jeter's sacrifice fly.

New York stranded 11 in the game, continuing its yearlong problem of hitting with men on base. 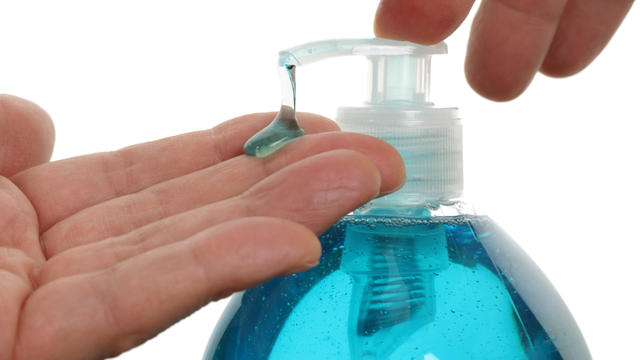