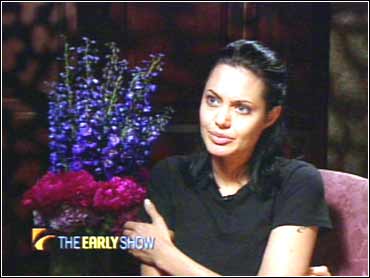 Angelina Jolie is easily one of the most talked-about young actresses in Hollywood today. Earlier this year she won an Oscar for her supporting role in Girl, Interrupted. But her accomplishments often are overshadowed by events in her personal life.

CBS News Early Show Contributor Laurie Hibberd caught up with Jolie to talk about her new film, Gone in 60 Seconds, and about life in general, including her recent marriage to actor-screenwriter Billy Bob Thornton.

Gone in 60 Seconds is an action film, and that's no accident. Jolie says she needed to do something different after the drama of Girl, Interrupted. "It was a really heavy thing," she explains. "It weighed on me."

So she lightened up with 60 Seconds, in which she plays a car thief opposite Nicolas Cage. That's quite a difference from the mental patient she played in Girl, Interrupted.

"As an actor, you worry…if you become…known (for) who you are…'cause you think, 'I'm supposed to tell stories, and you're supposed to believe I'm other people. You shouldn't be so focused about who I really am.'"

If awards are any indication, it would appear that Jolie is regarded as a credible actress. The trophies she has garnered this year alone include the Oscar, a prize her father, Jon Voight, won 22 years ago. He was especially pleased and proud that she mentioned him in her acceptance speech.

She paid tribute to Voight as a father during her speech.

"He told me that that was one of the...biggest compliments somebody could give him, that it was so important to be a great father," she says. "And so it was a really special night for everybody in my family."

Much was made in the media of her very close relationship with her brother, James. He was unfazed by the furor, says Jolie, because he was aware that his sister was getting ready to marry Thornton, who was her costar in Pushing Tin (1999). They shocked the entertainment world by eloping to Las Vegas a month after the Oscars. And, of married life, Jolie says, "It's amazing!"

Ask her if she feels like a big Hollywood star, and Jolie will turn back to reality: "I feel like a woman in love. And I feel like my brother's sister, my husband's wife, and my father's daughter. And that's who I feel like every second."

She's also a busy actress. Already this year, Jolie has filmed the thriller Dancing in the Dark with Antonio Banderas and is currently in England filming the action/adventure Tomb Raider, based on a popular video game.