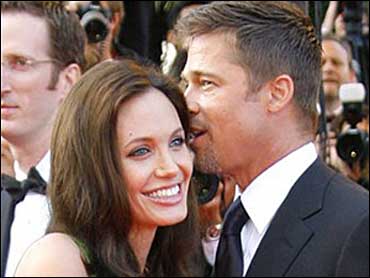 The Brangelina twins are here: Angelina Jolie has given birth to a girl and a boy.

The obstetrician who delivered the twins, Dr. Michel Sussmann, told The Associated Press that the actress, the babies and Jolie's partner, actor Brad Pitt, "are doing marvelously well."

He told the AP on Sunday morning that the boy weighed 2.28 kilograms (5.03 pounds) and the girl 2.27 kilograms (5 pounds). The 33-year-old actress gave birth at around 8 p.m on Saturday night, the doctor told the AP by telephone.

Pitt was there during the operation, said the doctor, who delivered the twins at the seaside Lenval hospital in Nice.

"Everything is going well," said Sussmann. "The mother, the babies, the father are doing marvelously well."

He said the Cesarean was moved forward from its originally planned date "for medical reasons" so that the babies could be born "in the best conditions." The doctor did not give details.

He said Jolie is expected to stay in the hospital for a few more days. The doctor said he believed that the baby girl's middle name was chosen in honor of Jolie's mother, actress Marcheline Bertrand, who died in January 2007 after a 7 1/2-year battle with cancer.

Jolie had checked into the hospital late last month to rest and be monitored by her doctor before the birth.

Before that, she, Pitt and their children had moved into a large estate, Miraval, in the French hamlet of Correns, which is just a short helicopter ride from the hospital. Correns is about 60 miles from Nice, a resort on the Mediterranean.

Though the lenses of the world's paparazzi had been trained on maternity wards across the French Riviera, Jolie managed to slip unobserved into the clinic, which has magnificent views of the Mediterranean, reportedly arriving by helicopter on the hospital's rooftop helipad.

The first photos of the new twins are expected to fetch millions of dollars.

Paparazzi gathered outside the hospital in Nice on Sunday morning, hoping for a shot of Pitt.

Local newspaper Nice Matin, which first broke news of the birth, reported Sunday that the couple have sold rights for the first photo of their newly enlarged family to a U.S. publication, which it did not name, and that the proceeds would go to charity.

The newspaper gave no source for that information. But the doctor told the AP that the couple decided to announce the birth to Nice Matin first because of its links to Nice. The newspaper called the twins "the most famous babies in the world."

Earlier in the week, the hospital said it had coated the windows of Jolie's room with a special material to prevent paparazzi from taking unauthorized pictures of the star couple.

The hospital said photos in magazines and on the Internet that purported to show Jolie and Pitt in her room were fake, either manipulated or showing other patients at the hospital.

Tourists and residents of Nice, a popular resort, welcomed news of the birth. The mayor of Nice, Christian Estrosi, had previously told the AP that the twins will always be considered honorary citizens of the city, regardless of whether they opt to obtain French citizenship. Estrosi said it was a "very great honor" for Nice that the Hollywood couple chose to give birth there.

"As a parent myself, I'm very happy for them and I wish them every luck and success in the future," Jeffrey Strand, a tourist from Ireland, said Sunday on being told of the birth.