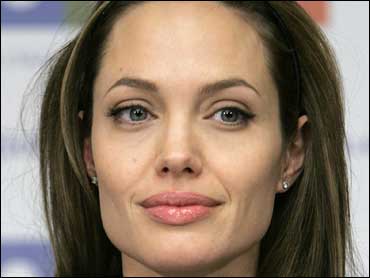 Angelina Jolie says she's entered a new stage in her life since losing her mother, actress Marcheline Bertrand, to cancer earlier this year.

"I want to be a great mom like my mom was, and I want to also do the things that I love," the 31-year-old actress said in an interview that aired Wednesday on NBC's "Today" show.

"So I'm at a strange, I suppose, place in my life. I think that that happens when you lose a parent, where you drop and do a different kind of serious, and yet, at the same time, you want to enjoy and laugh as much as possible every day."

Tearing up, Jolie added: "But I'm holding on to my family really tight at this moment because of that and trying to be — to be as good a woman as I can be in my life."

Jolie and her partner, Brad Pitt, 43, have four children: 5-year-old Maddox, who was adopted from Cambodia; Pax Thien, 3, from Vietnam; 2-year-old Zahara, from Ethiopia; and daughter Shiloh, who will be 1 on May 27.

Jolie, who has been shooting the thriller "Wanted" in Prague, Czech Republic, has said she plans to take a year off from filmmaking to spend more time with her family. "I have a very solid, very warm home. I'm very fortunate," she said.

Her new film, "A Mighty Heart," had its world premiere at the Cannes Film Festival earlier this week. Jolie stars as Mariane Pearl, the wife of journalist Daniel Pearl, who was kidnapped and murdered by Islamic extremists while reporting for the Wall Street Journal in Pakistan in 2002.

The loss of her mother, though heartbreaking, cannot be compared to what Mariane Pearl went through, Jolie said.

"It's a natural thing for a child to lose a parent," she said. "I lost my mom too young, but it happened. And I'm happy she's out of pain, 'cause I love her and she's my friend. Mariane lost her husband in a way that is not natural and is unfair. ... It's something to remember."