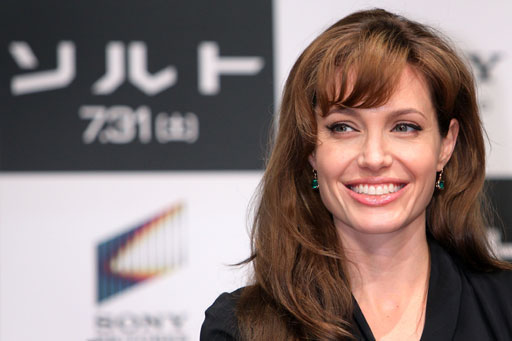 TOKYO (CBS/AP) Actress Angelina Jolie, in Tokyo for the weekend opening of action thriller "Salt," brushed off rumors about her shaky relations with Brad Pitt.

"He was just a wonderful father," she said Tuesday of Pitt, during work on the film, in which she plays a tough spy. She added that he often brought the children to the set.

"They played with fake blood, and they found mommy very strange in her different hair," she said.

Pitt and Jolie have been partners since they began a relationship while working on the 2005 film "Mr. & Mrs. Smith." They are raising six children - Maddox, 8, Pax, 6, Zahara, 5, Shiloh, 4, and twins Knox and Vivienne, 2.

Asked about her ability to work and maintain a happy family, Jolie told reporters at a Tokyo hotel: "Brad is the word that makes it possible."

Jolie, who arrived Monday, brought her four eldest children along on the trip. They have already spent some time shopping for toys inspired by Japanese director Hayao Miyazaki's animation characters Ponyo and Totoro, she said.

Jolie, 35, acknowledged she once surprised Maddox with her disguise as a male naval officer in "Salt."

He came into the room and reluctantly shook hands with the person he didn't know was his mother.

"I think I freaked him out," she said with a laugh, adding that he then watched her peel off her fake ears, hands and nose.

"I play these roles, but I'm always in every minute their mom first," she said. "I'm a bit of a goofy. I'm funny at home, I think."

Her children aren't going to be seeing the movie, though.

"I think it's very hard for them to see someone trying to kill their mom, even if she wins," she said.