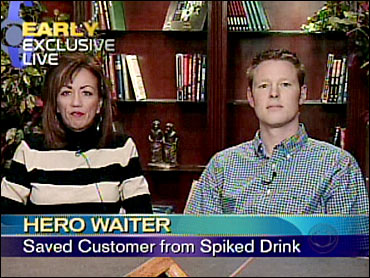 Nancy McGrath considers Colt Haugen "an angel" and a life-saver.

Haugen, 22, a student at the University of Colorado at Colorado Springs, was in his third week as a waiter at a local Ruby Tuesday restaurant last month when, he says, he spotted a customer slipping a pill into the drink of the woman he was with.

Haugen told his manager, and they called police. Haugen also whisked the drink away and replaced it.

The customer, Robert Psaty, 56, was arrested on suspicion of inducing someone to consume a controlled substance. He is free on bail.

Police say they tested the drink, and it contained anxiety-relieving Valium.

McGrath was on a blind date with Psaty, whom she met through a dating service.

"It was just a typical table," Haugen told Early Show co-anchor Harry Smith Thursday. "(An) everyday kind of thing; see it every night. A couple came in, they were just enjoying themselves, you know. It was kind of awkward at first. I noticed it was a first date. They were just sitting down to order food just like everybody else."

McGrath ordered a drink, then went up to the salad bar.

"I almost dropped the food I was holding. I couldn't believe what I was seeing, you know. I'm watching this, all the signs of this are there. I'm blown away.

"I talked with the manager. I told her, I said, 'I saw this plain as day. And if we don't do something about this, something's going to happen to this woman.' So, we both just agreed that, no matter what the consequences were, we were going to do what was right."

They then notified police, despite concern about the possibility of being accused by Psaty of making false accusations.

McGrath told Smith she didn't know what was going on until police arrived and, "I didn't know if I could believe him until I talked to Colt because he was, you know, so genuine and so sincere. I knew right away when I talked to him (Colt) that what he said was exactly true.

McGrath says she takes other medications, so the pill that was put in her drink could have harmed her.

She wants women to know that this can happen to anyone.

Because McGrath has three undergraduate degrees and a Master's degree, she said she had considered herself too smart to get into a situation like this: "I was shocked at myself. It could happen to anyone. I wasn't intoxicated and I was eating at a family restaurant," she told CBS News.

For his part, Haugen insists he's no hero, telling CBS News, "Heroes are fireman and policemen. All I did was see something bad happening to someone and I made it right." 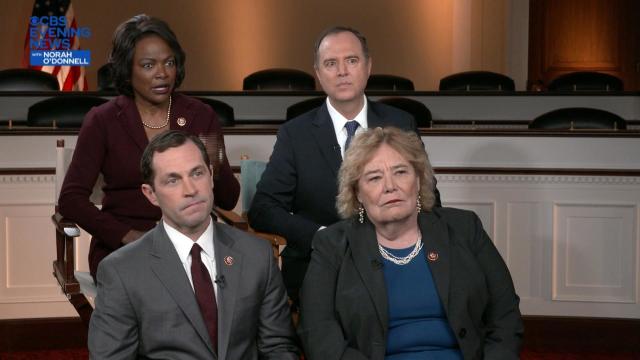