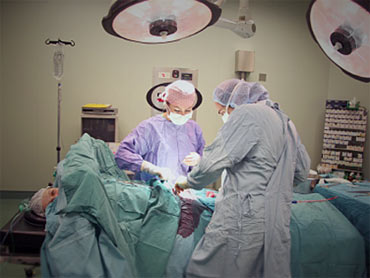 (CBS News) Even one incidence of being put under anesthesia as a child may increase risk for language and memory problems in children, according to a new study.

Researchers discovered that Australian children who had gone under general anesthesia before the age of 3 were 87 percent more likely to have language disabilities at the age of 10.

"At this point there is not enough evidence to show a causal link between anesthesia and deficits," lead researcher Dr. Caleb Ing, an anesthesiologist at Columbia University, told TIME. "It's concerning in the sense that we should continue to pursue research to answer this question. I don't think we should change our practice; we still need to do a lot more research before causing too much alarm."

The research team looked at 2,868 children born between 1989 and 1992 in Australia. Out of the group, 321 children had medical procedures done that required general anesthesia before they were 3.

The doctors tested the children using direct neuropsychological tests. Factors that were known to stunt brain development unrelated to anesthesia use, such as low birth weight, the mother's education and household income, were factored out. The standardized tests analyzed how well the kids could learn, think, remember, reason and use language. Researchers also asked subject's parents about any behavior problems, including depression or aggression.

The group that was given anesthesia at a young age were more likely to have learning problems than the other group. In addition to the increased chance of language difficulties, there was a 73 percent chance that the children would have problems with abstract reasoning by the age of 10. About 70 percent were more likely to have cognitive problems. The more times the child went under anesthesia, the higher the chance they had problems. However, doctors did not find a link between behavioral or attention problems and anesthesia use unlike previous studies.

The doctors did not have access to the children's medical records, so they could not tell which kind of anesthesia was used and for how long. One of the most commonly used drugs for kids in that age group, halothane, is no longer used, but drugs that are currently being administered work in a similar manner.

Dr. Randall Flick, a pediatric anesthesiologist at the Mayo Clinic in Rochester, Minn., told WebMD that the use of anesthetic drugs on children is concerning. Even something as common as nitrous oxide, which is used in dental procedures, should raise some red flags.

"Nitrous oxide has its own set of problems in addition to neurotoxicity. Most people in pediatric anesthesia are getting away from using nitrous oxide for any reason," he explained.

He did caution though that while the study is sound, people shouldn't jump to conclusions. For example, the need for a procedure that requires anesthesia may be the indicating factor instead of the drugs themselves, Flick explained.

Dr. Cheryl Gooden, a pediatric anesthesiologist at Mount Sinai School of Medicine in New York City, added to HealthDay that parents are never really cautioned about learning problems as children being a potential side effect from general anesthesia. But, she also pointed out that this study doesn't necessarily mean that it should be part of the conversation because the research is still inconclusive.

"This study still leaves a lot of unanswered questions," Gooden said. "We still have to prove that the anesthetic exposure is the potential or only causative agent leading to these neurodevelopmental problems. The evidence isn't there yet."

Ing said that just because this study may show increased risk does not mean they should avoid necessary surgical or diagnostic procedures.

"There are risks associated with avoiding or delaying procedures," Ing told HealthDay. "Talk to the surgeon and pediatrician to see if it is best to proceed. If your child needs surgery involving general anesthesia, it is best to choose an anesthesiologist who routinely treats children."

The study appears in the September issue of Pediatrics and was published online on Aug. 20.