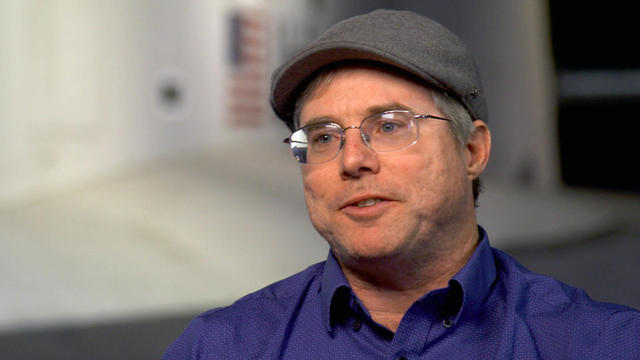 Ridley Scott's 2015 hit movie "The Martian" grossed $228 million and gave NASA a real-life publicity boost. The movie was based on the best-selling book by first-time author Andy Weir. Now, Weir is out with his second novel called "Artemis," a murder mystery that takes place on the moon.

CBS News' Jeff Glor sat down with Weir at the Intrepid Sea, Air & Space Museum to discuss his new book, which is already a best-seller, why he never wants to go space and what he plans to write next.

"I always wanted to be a writer, but I also like eating regular meals. So when I went to college, I went with software engineering, and writing ultimately was my hobby. I kind of bungled into success with 'The Martian' so now I get to be a writer," Weir said.

With no publisher backing him, Weir self-published "The Martian" in 2012. It was discovered by readers around the world who were pulled into Weir's unmistakable blend of real-world science and otherworldly drama. "The Martian" has since sold more than five million copies.

Weir has a massive and loyal following -- and he responds to every one of them who reaches out.

"Every email. They took the time to email me it seems only reasonable to respond. If they have questions, I'll answer the questions. If they just say 'hey, I loved your book!' I'm like 'Thanks!'" Weir said.

A number of Weir's fans went to an "Artemis" book signing in the Space Shuttle Pavilion at the Intrepid. They were eager to hear more about the lunar crime novel set in the late 21st century about a woman named Jasmine Bashara who tries to pull off a huge heist.

"Jazz was born in Saudi Arabia, but when she was six years old, she and her father moved to Artemis, which is the only city on the moon. She grew up in sort of a low-income, blue collar household. As an adult, which is when the story takes place, she's a porter, which basically means a delivery person but she makes most of her money off of illegal smuggling," Weir said.

Weir says he wanted to set his new story on the moon, in part because of a mineral that can be refined into many other materials.

"The moon has an enormous amount of this mineral called anorthite and if you smelt anorthite, if you refine it, what you get out of it is aluminum, silicon, calcium and oxygen. It gives you aluminum to build your moon base and oxygen to fill it with. It's amazing. It's like it's asking to be colonized," Weir said.

"If you can drive the price of booster technology, if you can drive that price down to the point that middle class people can afford to go into space, then you will have a space boom. A proper huge explosion in the space industry like the airline boom in the 40s and 50s," Weir said.

Surprisingly, Weir has no interest in going there himself.

"I write about brave people, I'm not one of them. I am an earthbound misfit. I'll stay right here, thanks," he said.

For Weir, even earthbound travel takes its toll.

"I'm afraid of flying. So, yeah I'm here in New York and I live in California. I have to take meds and stuff just to fly out here. I have a general problem with anxiety and have for most of my life and I spend most of my life just thinking 'Well, I'm broken and there's nothing I can do about that.' Now there are meds for that. I take medication and therapy and stuff. People know there's a lot of stuff for depression but they don't know there's a lot of stuff for anxiety. So to anybody who hears this or has anxiety problems, I urge you, go talk to a doctor. Anxiety is not just a failure of your personality, it's a physical problem that can be solved with medical solutions."

His anxiety does have an upside.

Fans may be able to visit the city of "Artemis" in theaters soon. Fox optioned the rights to the book before it was released. As for what's next, Weir plans to stick around Artemis for a bit.

"I would love for Artemis to be my own personal playground where I can have lots and lots of different stories with different main characters cause it's a city," he said.

He says he may one day visit the idea of exploring distant galaxies in his writing but for now, he's already got a sequel for "Artemis" in mind.

"I've got book ideas enough to last me the rest of my life. It's just, you know, what am I my most excited by at any moment and what do I think the readers want to read?"