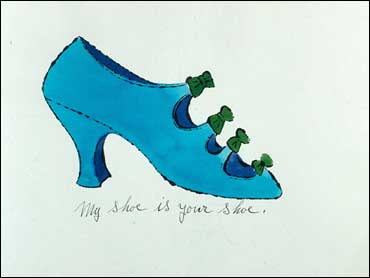 Before he began transforming cans of Campbell's soup into icons of Pop art and hanging around with Lou Reed, Edie Sedgwick and anyone else seeking 15 minutes of fame, Andy Warhol had a thing for shoes.

Heels, flats, boots. Whatever. And like his later obsessions with soup cans, Brillo boxes and Marilyn Monroe, his footwear fetish became the stuff of art.

A parade of 14 hand-colored lithographs of shoes paves the way for an exhibit at the Williams College Museum of Art that focuses on Warhol's early work and his transition from a commercial artist in the 1950s to a leading pop artist a decade later.

2"Throughout the '50s, he was making a name for himself," said Vivian Patterson, curator of "Warhola Becomes Warhol, Andy Warhol: Early Work," on display through June 10. "And he did it by making ordinary things into extraordinary things."

Hence the fancy footwear. They're blue with buckles, pink with straps and gold with purple trim. But there's something almost comical about them, and about the words Warhol scribbled underneath the images - captions such as "Any one for shoes" and "My shoe is your shoe."

"He made the shoes larger than life and gave them a personality," said Donna De Salvo, chief curator at the Whitney Museum of American Art in New York City. "He makes them into portraits without a face and turns them into objects of desire. He understood how images drive the world."

The series was done in the 1950s, when the artist still went by his given name, Andy Warhola. The Pittsburgh native, who died on Feb. 22, 1987, wound up in New York City in 1949 after studying commercial art at Carnegie Technical University. Known for his quirky and creative ideas, he began making big money illustrating for magazines such as McCalls, Harper's and Ladies' Home Journal.

Warhol's New York success opened a new world for the son of poor Eastern European immigrants. He may have altered his family name, but maintained a strong work ethic, becoming a prolific illustrator and one of the most sought-after commercial artists in New York.

3His childhood in an industrial factory town also inspired his fascination with illustrating mass-produced items that most people took for granted. That ultimately drew him to the soup can silk screens, two of which are part of the exhibit.

"Here was a thing that was mass produced by working-class people. It was good. It was nutritious. And it always tasted the same," said Tom Sokolowski, director of the Andy Warhol Museum in Pittsburgh.

But he didn't just explode onto the art scene with what are now his most recognizable works.

Many of his fine art prints of the 1950s, like the shoe series, were given to the people he was courting in New York's glitterati crowd. He started introducing himself to such people as Truman Capote and dancer John Butler and began rubbing elbows with international socialites.

"He sought these people out because they were who he wanted to be," Sokolowski said.

Warhol printed books to give his soon-to-be friends as calling cards, and some of Warhol's unbound manuscripts are on display in the Williams show, carrying titles like "Love Is a Pink Cake" and "There Was Snow in the Street and Rain in the Sky."

The books and Warhol's pursuit of celebrity explain a natural progression toward Interview magazine, the publication that Warhol started in 1969. The exhibit showcases the mock-ups and finished copies of the magazine's first and second editions, which featured a shirtless Mick Jagger and bikini-clad Raquel Welch on their covers.

The exhibit also highlights Warhol's forays into moviemaking by displaying snippets of "Kiss," a silent black-and-white film featuring close-ups of kissing couples, and "Empire," whose only cast member is the Empire State Building.

But the better-known Warhol also is on display. "Flash - November 22, 1963" and "Jackie" are his color-drenched examinations of JFK's assassination and the public images of a grieving first lady. There's also a poster of the giant yellow banana he illustrated during his collaboration with Lou Reed and the Velvet Underground for the band's first album cover, and a bright silkscreen rendition of Elizabeth Taylor.

"He had his hands in so many pies," Patterson said. "There was the commercial art, the pop art, the music and the movies. You might not like everything you see, but he did some amazing stuff."

There are no plans for the show to travel.