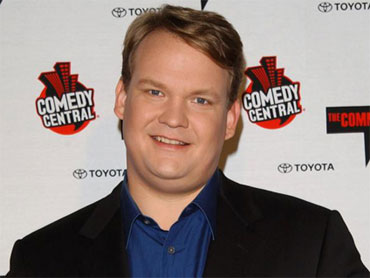 Richter, who was filling in for Regis Philbin, was asked by co-host Kelly Ripa if he had any ill feelings toward NBC or Jay Leno.

"Everybody said they were going to do something and then they didn't," Richter continued.

O'Brien began hosting the "Tonight Show" in June 2009. In January, he left the show and NBC after the network decided to revamp their struggling late-night lineup, canceling the 10 p.m. "Jay Leno Show" and putting Leno back in his old 11:35 p.m. timeslot.

"I've got to be careful, I do. I have children. I still need work," Richter said, according to the Daily News. "But it's very frustrating, when somebody says - and especially when they're on videotape - and say, I'm going to take this No. 1 show and hand it over and hope the next guy makes it the No. 1 show, and then doesn't."

Without mentioning Leno by name, Richter, who is still under contract with NBC, continued, "he says 'I didn't have any choice, they wouldn't let me out of my contract.' You know how multimillionaires are always being forced to do things they don't want to do. I've calmed down about it."

He said on the broadcast that no one at the network considered that the local newscast audiences might decrease with no scripted shows in the 10 p.m. timeslot or what impact that would have on the "Tonight Show," claiming, "There was a lot of planning that was done very short sighted."

Richter told Ripa he didn't think he'd be out of work so unexpectedly.

"I thought, oh, I'll have time on the 'Tonight Show,' That's as good as it gets…I guess I'm really good at getting kicked off the air cause that's what I've been doing for the last 10 years," referring to his string of failed TV projects

Richter told Ripa that a theater tour was "a distinct possibility."