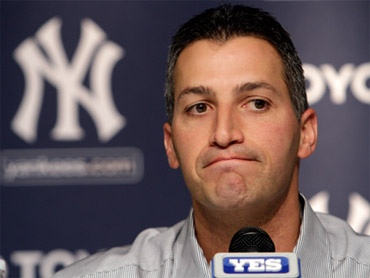 NEW YORK - Andy Pettitte announced his retirement at Yankee Stadium, saying he no longer has the "hunger" to pitch another season.

With wife Laura sitting at his side, Pettitte said Friday he had conflicting feelings about leaving the game. He said "it was an easy decision, but it wasn't an easy decision." As recently as two weeks ago, he thought he would return for another season.

The 38-year-old left-hander said at a news conference that his body was in shape to pitch but "my heart's not where it needs to be."

"It just didn't feel right for me anymore," he said. "I didn't have the hunger, the drive I felt like I needed."

Pettitte said he was pretty sure after the Yankees' last playoff game in October that he would retire, but Laura persuaded him not to make a decision until he was sure. She said he made up his mind last weekend, while driving home to Deer Park, Texas, from their ranch.

"I'm done," she remembered him saying.

"Always strolling in a little late," Pettitte said with a smile.

Pettitte won't disappear from public view entirely. He is expected to be a witness this summer at the trial of former teammate Roger Clemens, indicted on charges he lied to a congressional committee when he denied using performance-enhancing drugs.

"That has not had any affect, I mean zero, in my decision," Pettitte said. "It's had no impact in my life."