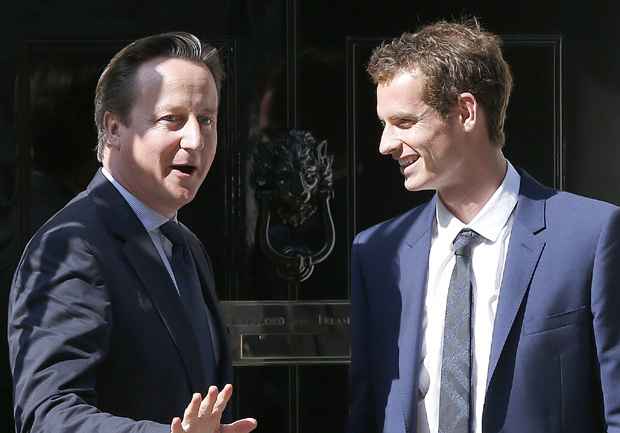 After beating Novak Djokovic in straight sets at the All England Club on Sunday, Andy Murray became the first British man to win the Wimbledon championship since Fred Perry in 1936.

Now, if David Cameron has anything to say about it, Murray may follow up his title with knighthood.

The British prime minister, who watched the match from the Royal Box, seemed to be on board with Murray getting knighted and joining the ranks of other star athletes such as Roger Bannister, Nick Faldo and Kelly Holmes.

"I can't think of anyone who deserves one more," Cameron said.

Murray, however, quickly downplayed the possibility.

"It's a nice thing to have or be offered," the 2013 Wimbledon champion said. "I think just because everyone's waited for such a long time for this, that's probably why it will be suggested but I don't know if it merits that."

The national papers featured Murray on their front pages - and at least one of them suggested the honor.

"Arise Sir Andrew, knight of the holy grail," The Times of London wrote in its lead story.

The Guardian had the simplest front page — a huge photo of Murray kissing the trophy with "Champion" written across the bottom.

"History in his hands," headlined the Daily Mirror. Across the top of the Daily Express were the words "Magical Murray."

According to the BBC, a peak of 17.3 million people in Britain watched the match on television. Last year's final, in which Murray lost to Roger Federer, reached a peak of 17 million.

Britain has been waiting generations for a men's champion (the last women's champion was Virginia Wade in 1977). But the expectations have been increasing almost exponentially over the last 15 years or so. That's when Tim Henman made the first of his four semifinals, sending the public into a frenzy of hope from 1998 to 2002.

But each time, Henman failed to reach the final.

A few years later, along came Murray, a kid from Scotland with a game to be reckoned with. With his mother in his box and his face often gripped in growls and grimaces, Murray became the next big British hope.

He made the semifinals three years in a row before reaching the 2012 final, but then lost to seven-time champion Federer. A loss that may have changed him for the better, forever.

Then he beat Djokovic in the U.S. Open final, winning his first major title and the first Grand Slam singles title for a British man since Perry won the U.S. championships in 1936, the same year he won the third of his three straight Wimbledon titles.

With last year's wins and losses behind him, Murray didn't let his second chance at his home Grand Slam slip away this time.

"In the end, inside a giddy, sun-bleached and adoring Centre Court, it felt like it was all worth the wait," The Guardian wrote in its top story, then continued. "It is a genuinely gold-standard achievement for the man from Dunblane, given weight not just by the burden of history and the folkish annual summer romance of Wimbledon itself, but by the fact he is competing in one of the great periods of elite men's tennis."