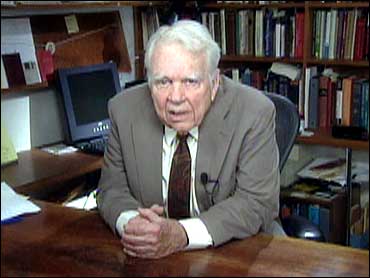 This segment was originally broadcast on April 22, 2007.

I haven't heard about it yet, but I imagine CBS is planning a big surprise party for me because I'm coming up to my 1000th commentary on 60 Minutes. You've probably forgotten some of the most memorable things I've said. I know I can't remember anything memorable.

The interesting thing for me though is that everything I've ever done on camera has been saved on videotape. Keith Kulin, the editor, has a storeroom and he saves everything whether it's worth saving or not.

It's going to be interesting to see whether books or videotapes end up being the most used reference tool. I hope its books.

Before there was such a thing as a book, thousands of years ago, nothing got saved. We don't know what the cavemen thought about caves even though they tried to write on the walls.

I love the books I have in my office. There are about 600 of them and if I knew everything in all of them, I'd be the smartest guy in the world.

Well, I don't know everything in my books. Sometimes when I get up in the morning, I can't even remember where my socks are.

I don't really like dictionaries but I have several good ones and I'm always looking at those.

One of the best reference books ever written, "Modern English Usage," is written by a man named Fowler. If you do any writing at all, you can't be without this. We're lucky to have English as our language because it's the best language in the world but it's not easy.

One of my favorite books of all time is "A Preface To Morals" by Walter Lippmann. Lippmann was one of the best writers and thinkers there ever was.

You can't be a good writer without being a good thinker. This is a depressing thought for a writer.

I have four volumes by Charles Darwin. I don't usually like books with leather jackets but I treasure these.

Another book I treasure is "The Modern Researcher" by my friend Jacques Barzun and Henry Graff. Jacques is the smartest person I've ever known. He's going to be 100 years old in November. Jacques still has all his marbles and I hope I live long enough to go to his birthday party.

I love my books. I wouldn't trade these books around me for a million dollars. Don't tempt me with an offer though because I have duplicate copies of all of them.