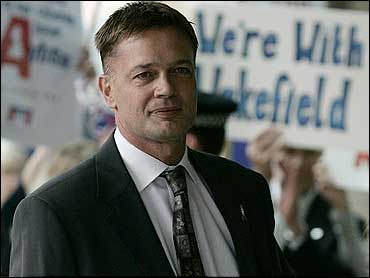 (CBS/AP) Dr. Andrew Wakefield is either the victim of  "a ruthless, pragmatic attempt to crush any attempt to investigate valid vaccine safety concerns" as he describes it or a huckster paid by lawyers in 1998 to falsify an autism study to make it appear vaccines were to blame for the disorder. The lawyers later sued the vaccine makers.

The huckster version of events is described in a British Medical Journal piece released this month which rips apart Wakefield's study and his motivation for writing it.

"Such clear evidence of falsification of data should now close the door on this damaging vaccine scare," said BMJ's editor-in-chief Dr. Fiona Godlee in a statement.

The 1998 study, which appeared in the prestigious British journal the Lancet, was groundbreaking when it came out. Wakefield examined 12 children with regressive autism - they were developing normally and then went awry. Wakefield said their symptoms appeared soon after receiving a vaccination for measles mumps and rubella called an MMR. In rich nations, almost all children receive the shot.

Wakefield, a gastroenterologist, hypothesized that the vaccine caused both the autism symptoms and gut problems.

Parents with autistic children, desperate to find it's cause and a cure, quickly rallied around Wakefield's study. Vaccination rates dropped in Britain as well as the United States. New cases of measles rose.

And so did the cases of autism or at least its diagnosis.

Later studies tried to replicate Wakefield's findings, but could not. Debate raged about the root causes of autism.

But the BMJ investigation by journalist Brian Deer found that five of the 12 children in Wakefield's paper had symptoms before the MMR shots. One girl turned out to have a heart disorder. Her symptoms disappeared after it was treated. The report claims three of the children turned out to not have autism at all and only one was eventually diagnosed with the regressive form of it described in Wakefield's paper.

The report also alleges that Wakefield falsified timeliness and when investigators showed Wakefield's study to parents of the children involved, some claimed he misrepresented their stories.

Perhaps most damagingly, the report claims Wakefield developed his autism vaccine theory only after he was hired by lawyers planning to sue vaccine makers. BMJ claims he was paid more than half-a-million dollars for his efforts.

On Wednesday, Wakefield fired back. Speaking to CNN's Anderson Cooper, he claimed the report's author was "a hit man who has been brought in to take me down" by big pharma.

According to the network, Deer signed a disclosure form claiming he has no financial interest in the matter, but freely admits he was paid by BMJ for his reporting.

"That's what journalists do," he told CNN.

Last year, the Lancet formally retracted Wakefield's study. Ten of the 13 authors had earlier done the same.  Wakefield has since been stripped of his medical license in Britain.

But for Wakefield's supports, the battle drags on.

"I cannot imagine for a second that Dr. Wakefield would have any reason to falsify data," Wendy Fournier, president of the National Autism Association, told CNN. "He's a man of integrity and honesty and truly wants to find the answers for millions of children who have been affected by autism."