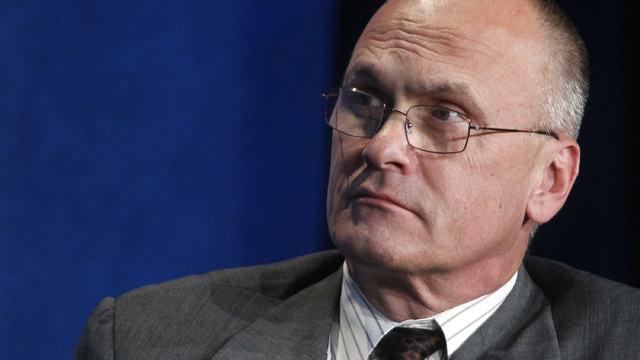 In a 1990 episode of “The Oprah Winfrey Show,” the ex-wife of labor secretary nominee Andrew Puzder alleged that her husband had abused her, telling the television host that Puzder had “vowed revenge” after she went public with her accusations.

Lisa Fierstein, Puzder’s ex-wife, told Oprah in the hour-long episode (titled “High Class Battered Women”) that the former fast food restaurant executive had promised that she “will pay for” the allegations.

“He said ‘I will see you in the gutter. This will never be over,’” Fierstein says in the video, where she appears wearing a wig, sunglasses, and is identified by the pseudonym “Ann.”

“Most men who are in positions like that don’t leave marks. The damage that I sustained, you can’t see. It’s permanent - permanent damage. But there’s no mark and there never was,” she continues as the credits roll on the episode. “They don’t hit you in the face, they’re too smart. They don’t hit you in front of everyone.”

The two divorced in 1987, and months after her appearance on Oprah, Fierstein recanted her domestic abuse charges as part of a child custody agreement. Since then, she has said that she made those accusations at her lawyer’s prompting. Puzder, for his part, has denied the allegations. And according to a spokesman, his former wife has had a cordial relationship with the family now, even spending the last two Thanksgiving holidays with them.

Fierstein’s comments are once more in the spotlight following Puzder’s nomination by President Trump to lead the Labor Department. And the tape, first obtained by Politico, has been viewed by at least two senators who will be questioning President Trump’s labor secretary pick in his confirmation hearing Thursday.

Sen. Patty Murray, D-Washington, addressed the video -- which she said has been made available to all members of the Senate Health, Education, Labor and Pensions (HELP) committee -- in a press conference Wednesday.

“I am personally -- as many people are -- deeply troubled by what was in that tape,” said Murray, who is the ranking member on the HELP panel. “Each senator has to evaluate the video for what they feel as they watch it.”

At least five Republicans in the Senate have not made public how they’ll vote on Puzder, CBS News’ John Nolen reports. Sens. Susan Collins of Maine, Johnny Isakson of Georgia, Lisa Murkowski of Alaska, Mike Enzi of Wyoming and Tim Scott of South Carolina -- all members of the Senate HELP committee -- have declined to state how they plan to vote until after Puzder’s hearing. (Most of the senators have indicated they don’t typically comment with their vote ahead of hearings.)

Collins told reporters earlier this week that she had seen the Oprah tape and was “reviewing the other information that has come to light.”

Murray, the Washington Democrat, said that the committee also had other considerations when weighing Puzder’s nomination, including revelations that he had employed an undocumented immigrant and reported instances of sexual harassment at the fast food chains owned by CKE Restaurants like Hardee’s and Carl’s Jr.

In the news conference, Murray said Puzder’s senior employees had called the work place “patriarchal” and “a good old boys’ club” where women were “made to feel like the help.”

“A corporate culture grounded in objectifying women has no place in our government,” she said.

When asked whether the Oprah tape would be brought up in Thursday’s confirmation hearing for Puzder, Murray replied: “There is a lot to bring up tomorrow…I think there are many things in this man’s record.”