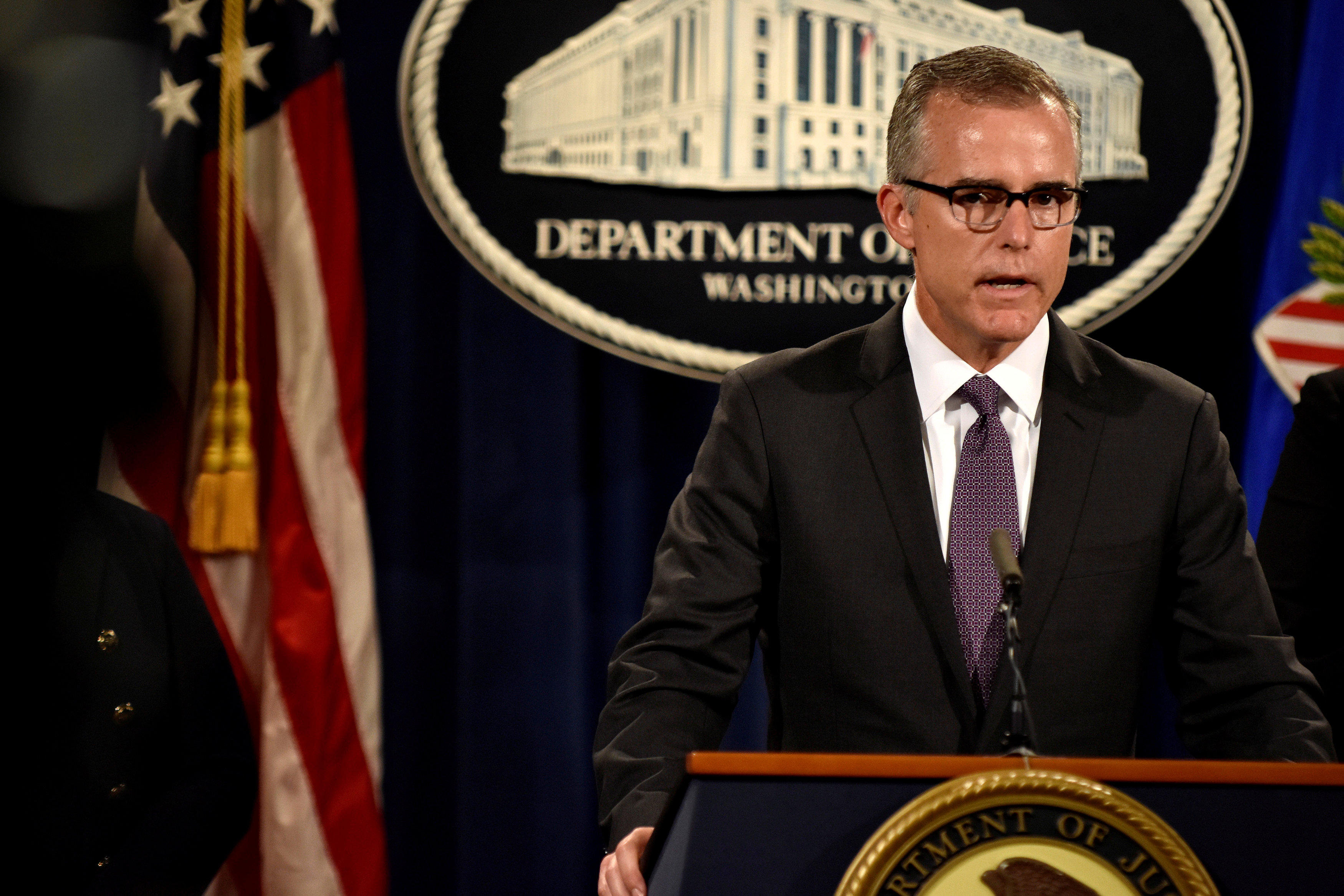 Former deputy FBI director Andrew McCabe is suing the FBI and the Department of Justice (DOJ), alleging they refused to provide him with documents related to his firing. Attorney General Jeff Sessions fired McCabe in March, just two days before he was set to retire.

The complaint says the DOJ has publicly defended the firing yet failed to identify for McCabe the policies and procedures it followed before dismissing him. The department has withheld the information, McCabe's lawyers allege, for fear that the materials could be used against them in any additional lawsuits.

"We don't create or adjudicate under secret law or procedure," David Snyder, one of McCabe's lawyers, said in an email to The Associated Press.

The case pits the career law enforcement official against a Justice Department that employed him for more than two decades. It refocuses attention on a firing last March that divided current and former DOJ officials. And it signals that McCabe, repeatedly targeted for criticism and attacks by President Trump in the last year, is determined to try to clear his name in court even as he faces a possible criminal probe into whether he intentionally misled internal investigators.

The lawsuit in federal court in Washington also comes just days ahead of a Justice Department inspector general report expected to criticize senior FBI officials, including McCabe, for their actions during the Hillary Clinton email investigation.

McCabe's lawyers say in the complaint that they want the records as they "seek to vindicate Mr. McCabe's rights and restore his good name," and as they weigh whether to take more legal action over a firing they contend was improper. The case names as defendants the Justice Department, the FBI and the inspector general's office.

A spokeswoman for DOJ declined to comment Tuesday evening, and a spokesman for the watchdog office did not immediately return messages seeking comment.

Attorney General Jeff Sessions fired McCabe on March 16, less than two days before his scheduled retirement, on the recommendation of FBI and DOJ officials. McCabe, who joined the FBI in 1996 and was named to the No. 2 position 20 years later, became the bureau's acting leader following the firing in May 2017 of James Comey as director.

The termination followed allegations that McCabe had misled disciplinary officials and Comey, his then-boss, about his role in authorizing FBI officials to speak with a Wall Street Journal reporter for an October 2016 story about an FBI investigation into the Clinton Foundation.

The inspector general's office concluded in a report earlier this year that McCabe had repeatedly deceived investigators and referred the matter for potential criminal prosecution to the U.S. attorney's office in Washington. McCabe has denied the allegations, and has said that when he thought his answers were being misunderstood during interviews with investigators, he tried to correct the record.

In the lawsuit, McCabe's lawyers say the department has repeatedly insisted that it followed appropriate policies and procedures before firing McCabe but has either denied or refused to respond to multiple requests about that process.

Among the records being sought are an inspector general manual that lays out the guidelines governing the office and FBI policy guides on how disciplinary matters should be handled.

The lawsuit says the inspector general's office refused to make the manual available for public review and denied multiple requests to provide it, and also denied the lawyers access to a library or reading room where the materials could have been reviewed. The complaint also says the FBI and DOJ failed to disclose a series of requested FBI documents, preventing McCabe and his lawyers from knowing whether appropriate procedures were followed before the firing.

In a May 3 email to the FBI's Office of Professional Responsibility, according to the complaint, Snyder, McCabe's lawyer, asked for records about the FBI's "Offense Codes," media relations policy and any other manuals about internal investigations and discipline that might relate to McCabe's firing.

The FBI and DOJ lawyers turned down the request.

The complaint quotes a May 21 email from one DOJ official that said, "In the absence of actual litigation, (Plaintiff's) demands are not constrained by the normal rules of discovery, which exist, in part, to protect defendants from burdensome or otherwise unreasonable requests."