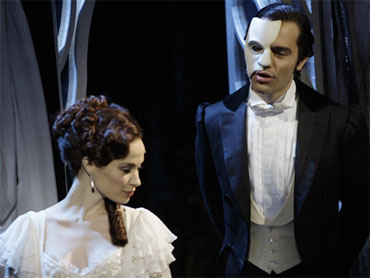 
Lord Andrew Lloyd Webber has a lot to live up to. A new musical of merit has been a long time in coming from the man whose credits read like the history of musical theatre.

Webber holds the record for the longest-running musical on Broadway with "Phantom of the Opera," but he may be better known to younger musical fans as the king of musical reality TV, where he's been in the judge's chair dishing out praise and scorn to would-be theater stars.

Tuesday night in London, however, was Webber's his much-hyped return to the traditional stage. I joined hundreds of other eager theater fans for the premier of Phantom sequel, "Love Never Dies" in London's West End.

Love Never Dies picks up the Phantom's story 10 years on from where Webber's epic left off - despite the passing of 25 years in non-theater time. The action moves to Coney Island from the great Parisian Opera house.

Now I am not one of them, but some cynics might suggest this was a clever plot relocation, given that most of Webber's diehard fans are in the U.S. But the lack of that Parisian backdrop doesn't detract from what is no doubt the director and composer's greatest success to date.

Love Never Dies sees Christine, the love interest in Phantom's legendary love triangle, invited anonymously by the masked-man to sing once more, with Raoul their child in tow.

A lot is riding on this continuation of a love story, which has been in the making for more than 15 years.

"I find all my musicals very personal," Lord Webber told me. "They are like children and, yes, I do worry and fret about every single detail, but it's because I care so much."

The show is set to become a permanent fixture at London's Adelphi Theater, at least for our lifetimes.

They clapped and screamed with delight as each luscious scene unfolded.

The sweeping music clearly shows Webber's devotion to his musical hero, Puccini. It consumes the audience and has them captivated by the time the new theme song, a glorious balled called "Till I Hear You Sing Again," begins. I'll be surprised if the tune doesn't go as big, if not bigger, than the Phantom theme, "Music of the Night".

The composition cements the fact that this genus of musicals has lost none of his magic touch.

Another stand-out musical moment is the thrilling "Coney Island Waltz," which sticks in your head like a Lady Gaga riff.

Critics were blogging away with their verdicts within minutes of the final curtain going down at the Adelphi, and despite the audience's enthusiastic reception, many panned the sequel.

But Lord Webber told me the critics are not his primary concern.

"As a child, I went along to see The Sound of Music, and while the critics were less than kind about the glorious Rogers and Hammerstein score, I could find no fault. You see, the public is the critic, and that show ran for years, becoming iconic," he laughed.

"All I ask is that you enjoy it," the theater icon told me.

By the end of the night, when Lord Webber himself joined the cast onstage for a final bow, everyone in the theater was reassured that the multi-million dollar production was worth every penny.

Even Lord Webber, who is forever shy and unsure of his own work, must have felt the real wave of love for his latest production. It would appear that his fans' love, at least, never dies.