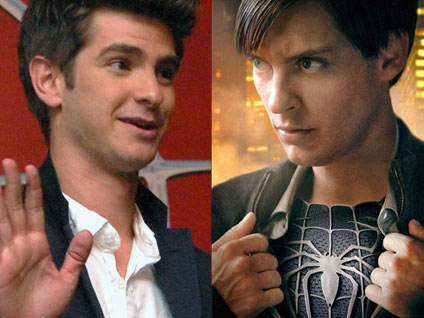 NEW YORK (CBS) One major difference between actors Tobey Maguire and Andrew Garfield is that Maguire is hanging up his web-slinging gear after three "Spider-Man" films, and Garfield is just about to pick his up.

But there are other ways that the two men who portray Peter Parker are different. Here are five of them:

1. One had a transAtlantic upbringing. Garfield was born in Los Angeles but moved to England when he was 3 years old.

2. One is a father of two. Maguire and his wife Jennifer are parents to daughter Ruby and son Otis.

3. One starred in Heath Ledger's last film. Garfield had a role in "The Imaginarium of Doctor Parnassus," which was the final project Ledger worked on before his death.

4. One has been referenced in a comic book. In "Friendly Neighborhood Spider-Man #12," Peter Parker/Spider-Man is quoted as telling his school principal, "You want acting...go get Tobey Maguire," a nod to the the actor's portrayal of the character in the "Spider-Man" films.

5. One has been in the wrestling ring - but in clay form. On a 2007 episode of MTV's "Celebrity Deathmatch," a claymation Tobey Maguire and Jake Gyllenhaal fought each other to the death. Maguire was the one who met an untimely end - he was beaten to death with his own leg.