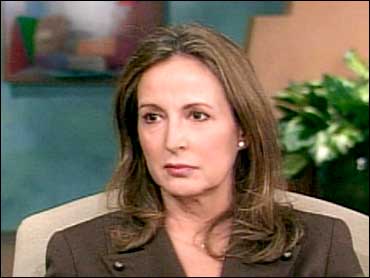 Her story shocked the nation. Almost three years ago, a young mother killed her five children by drowning them in the family bathtub.

After being convicted on two counts of capital murder, Yates was sentenced to life in prison (she is not eligible for parole until 2041). Yet, many details of her story have been left untold, until now.

Investigative reporter Suzanne O'Malley is the first writer to correspond with Yates, and her story is published in her own words in the new book, "Are You There Alone? : The Unspeakable Crime of Andrea Yates."

In some of the letters to O'Malley, Yates speaks about her children and how much she misses them.

O'Malley says, "She understands what happened. It's a living nightmare for her. I don't think she'll ever forgive herself. She asks her husband, Rusty Yates, how he forgives her. And he said, 'Andrea, if I were in a car driving the five children and I had a heart attack and had a wreck and they all died, would you blame me? Would it be my fault?' and she said, 'No.' He said, 'That's the same thing with you. You're mentally ill. It's a brain sickness.'"

In a letter, Andrea Yates writes that it bothers her the jury did not think she was mentally ill and "offended that they felt it was, a hidden motive. But I'm grateful the jury didn't give me the death penalty."

The reason the jury did not accept the insanity defense is because they thought she knew what she was doing was wrong. She knew right from wrong. But after looking at 2,000 pages of records, O'Malley says, "According to one expert, she was one of the five sickest patients this doctor had ever treated. And this doctor treated 6,000 patients."

Yates was diagnosed as having bi-polar disease after she had been in prison for a year. O'Malley notes, "When she was medicated, there was a wonderful drug known as rocket fuel, which kicks people out of depression. But if you're manic-depressive, you do not give that because it kicks you into mania; it makes drowning five children an easy job."

What makes it confusing is that Yates waxes and wanes. O'Malley notes, "This is the way the illness works. The same way she dialed 911. The operator asked her, 'Are you there alone?' that's how I named the book. She answered, 'No, my kids are here.' She knew to dial 911. But at the same time, another part of her brain was so sick that she could drown five children in less than an hour."

Read an excerpt from "Are You There Alone?":

Chapter One: The Prophecy

A little before 10:00 AM -- 9:56, to be exact -- Russell "Rusty" Yates's cell phone rang in the sixth-floor Shuttle Vehicle Engineering Office he shared with three other National Aeronautics and Space Administration (NASA) employees. It was his wife, Andrea, calling. Not even an hour had passed since he had left her at home with the kids. She'd been sitting at the kitchen table eating Corn Pops out of the box. He'd given her a 300-milligram morning dose of the antidepressant Effexor and, the previous night, a 45-milligram dose of the antidepressant Remeron with a 15-milligram dissolvable Remeron SolTab booster. His mother was due at the house to watch the kids at any minute. He had a 10:30 AM presentation to give to the Space Shuttle Program manager on the progress of the space vehicle's instrumentation systems upgrade.

"You need to come home," Andrea said, in a "firm, sober" voice Rusty had heard only once before -- and dreaded. Not long after the birth of their fourth son, Luke, two years earlier, she'd had a sort of nervous breakdown. That time, she had asked Rusty to come home from work; now she wasn't asking him, she was telling him.

"It's time," she repeated, later recalling that she hadn't "said it well."

Rusty Yates didn't need to hear any more. When his wife's father had died three months before, she'd gotten sick again. And there was a new baby at home, 6-month-old Mary. He left his office, stopping only to tell a colleague he had a "family emergency." On the elevator he wished for the days before Andrea had become sick, when he didn't have to communicate with her through a filter of mental disease, wondering whether she was really well or might try to kill herself as she had twice before. Wondering whether he'd micromanaged life well enough to be there to stop her if she did.

He raced through the lobby and out the front doors of NASA Building One, dialing his mother on the way. Dora Yates had come from her home in Hermitage, Tennessee, to help out when Andrea became ill. A couple of weeks had stretched into a couple of months. Her daughter-in-law had been hospitalized twice, but she hadn't improved much. They were all running on fumes.

"Mom, are you there yet?" Rusty asked.

"No," Dora Yates answered. She hadn't left the Extended Stay America Hotel on NASA Road 1 yet.

"Hurry," he told her. "Something's wrong at the house."

He was ten minutes away. He sprinted across the employee parking lot to his SUV and dialed Andrea from behind the wheel. Thank God she answered.

"Is anybody hurt?" he asked.

The kids? What did she mean? "Which ones?" Rusty asked.

"All of them" was her unfathomable answer.

At 9:48 AM on Wednesday, June 20, 2001, eight minutes before she called her husband, Andrea Yates had dialed 911. "I need a police officer," she said, her breath heaving unsteadily into the phone.

"What's the problem?" police telecommunicator Dorene Stubblefield asked with a whiff of attitude.

"I just need him to come," Yates said.

"I need to know why they are coming," Stubblefield persisted. "Is your husband there?"

"I need to know why they are coming," Stubblefield repeated.

No answer. Nothing but Andrea Yates breathing irregularly, as if an intruder might be holding a gun to her head.

"Is he standing next to you?"

"Are you having a disturbance?" Stubblefield asked, thinking this might be a domestic problem. No answer. She had to determine whether she was sending officers into a dangerous situation. "Are you ill, or what?"

"What kind of medical problems?"

Valuable seconds ticked by. Who could explain this to a stranger on the phone?

"You need an ambulance?" Stubblefield suggested.

"No, I need a police officer," Yates said.

"Do you need an ambulance?" Stubblefield repeated.

"No...Yes, send an ambulance..." Yates's breath became even more labored. Then nothing but static....