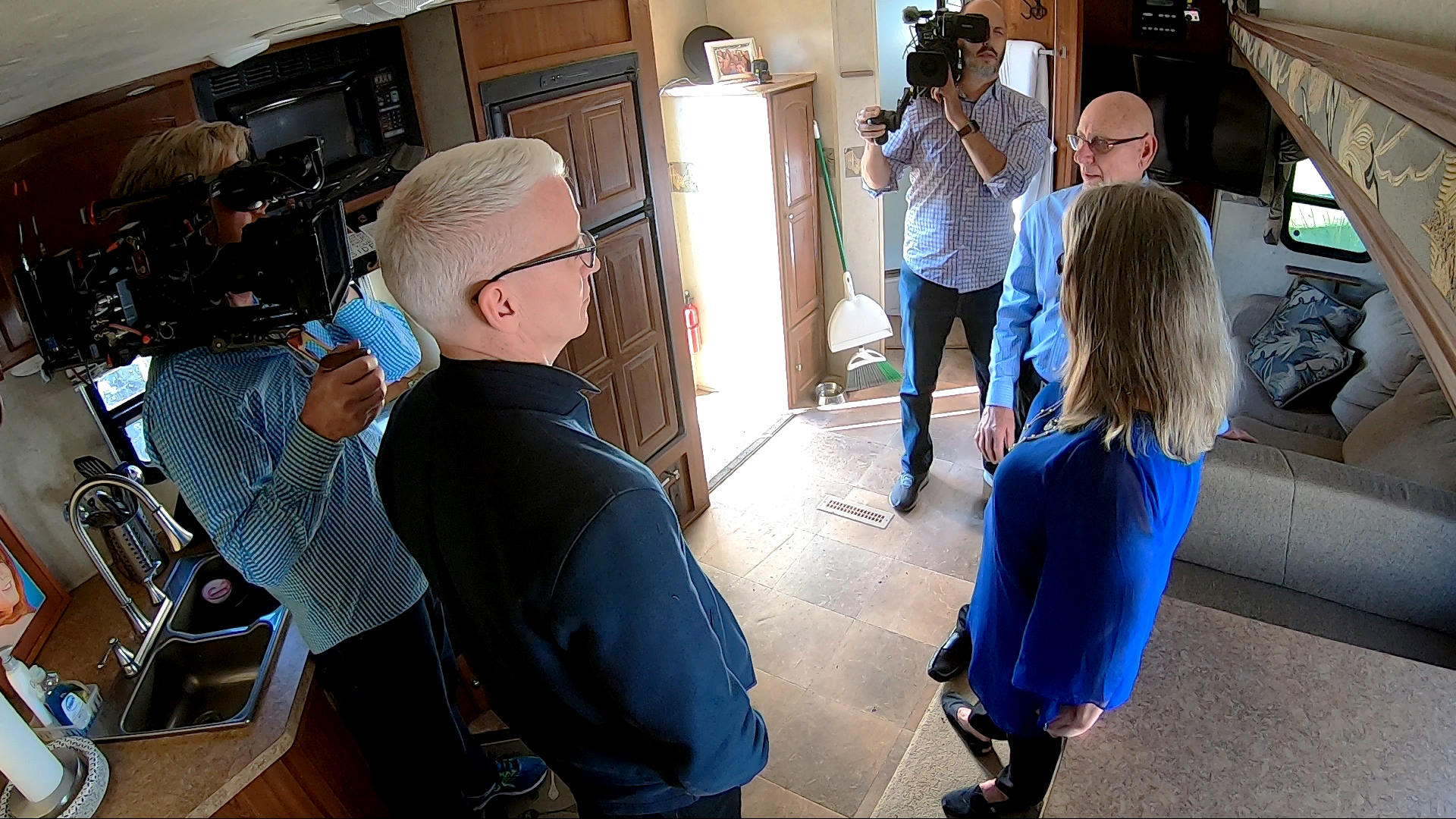 When 60 Minutes correspondent and CNN anchor Anderson Cooper reports on tragedy, he does not approach it as just another story he's covering. His method has been informed by personal experience: both years of interacting with victims' families, and his own loss—that of his brother, who died by suicide at the age of 23.

In short, he speaks what he calls the "language of loss."

Sandy and Lonnie Phillips are fluent in that language; their daughter, Jessica Ghawi, was murdered in the 2012 movie theater shooting in Aurora, Colorado. As Cooper reports this week on 60 Minutes, the Phillips have now devoted themselves to helping other people who are going through similar trauma. They quit their jobs, shed most of their belongings, and rented out their house so they can travel around the country to the scene of mass shootings. They meet victims and families and, while offering a kind of survival guide to grief, also build a network of survivors.

Reporting on her parents wasn't the first time Cooper met Jessica Ghawi's family. While he was covering the Aurora massacre, he interviewed her brother, Jordan Ghawi.

"He said some things to me that really forever changed the way I thought about mass shootings and covered mass shootings," Cooper told 60 Minutes Overtime's Ann Silvio in the video above.

While speaking on live television, Ghawi told Cooper not to reference the name of the shooter who killed his sister, not to show his photo. He said he could still rattle off the name of other mass shooters and didn't want it to happen in Aurora.

"I want the victims to be remembered, rather than this coward," Ghawi said.

The notion stayed with Cooper. Today, when he covers mass shootings on his CNN program Anderson Cooper 360°, he refuses to say the name or show the photo of the gunman. He tells correspondents who appear on his show to do the same.

"It's completely unnecessary," he said.

Cooper said he is also conscious of being respectful when reporting from the scene in the aftermath of a shooting. As he speaks on television, he is aware that a family who just lost a loved one may be watching.

He feels this way, in part, because he remembers what it was like to be on the other side of the camera.

When Cooper was 21, his older brother Carter died by suicide. Cooper remembers people camped outside his home for days, trying to get photos. As he and his mother attended his brother's wake, they walked into the side door of the funeral home to cameras trained on them, waiting to capture their grief.

"I've never forgotten that feeling, and I'd never really want to find myself on the other side of a camera doing that to somebody else," Cooper said. "If I don't get the picture, if I don't get the story, that's fine. I'd rather be able to go to sleep that night and think, 'I respected their privacy.'"

When people going through grief feel ready to talk to him, Cooper said he speaks their language of loss. He doesn't feel uncomfortable if they cry, get angry, or sit silently. He remembers that, after his brother died, his mother told him the two of them were alone in a lifeboat. But in time, people who understood grief, who had experienced a similar tragedy, were able to get in the lifeboat with them.

That's what the Phillipses are trying to do, Cooper said—speak the language of loss in order to understand a family's perspective. They know that when a parent loses a child, they wonder how to live through the next 30 seconds, the next few minutes, the next night.

And they know that grief doesn't end.

"I think we like to think it goes away and you get over it and you move on, you go back to work and everything's fine," Cooper said. "But it's good to have other people out there who know that's not how it happens and who are comfortable communicating with you in this new language, this language of loss."

The video above was produced by Ann Silvio, Rebecca Chertok Gonsalves and Lisa Orlando. It was edited by Lisa Orlando.

The tech behind the Bitcoin Beach Wallet