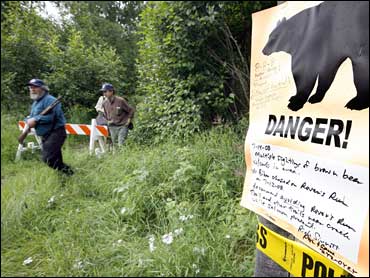 Even in a city whose logo is "Big Wild Life," the summer of 2008 is testing residents' tolerance for large carnivores.

The problem is bears, black bears and bigger grizzlies. So far this summer, three people have been mauled in the city.

Some people say humans are to blame for the confrontations and insist that no bears should be killed because of the attacks.

On the other side is a growing chorus of people like Devon Rees, who want something done about the big bruins.

"It is pretty much unsafe to walk around at night," he said.

On one recent evening, Rees heard splashing in the creek near his Eagle River home and assumed it was salmon. Seconds later, however, a bear rushed at him from the woods and knocked him to the ground.

"I wasn't going to lay down and take it. The bear came and tried to fight me," said Rees, 18, who works in a meat store. "I started punching it in the head, kicking it and elbowing it ... I was boxing him using one arm to defend, one arm to strike."

Residents share the municipality — covering more than 1 million acres and with more than 360,000 people — with more than 300 black bears and 50 to 60 grizzlies. Aggravating the problem is that Alaska's largest city is snug up against the half-million-acre Chugach State Park, the third largest state park in the United States.

"Chugach State Park is a bear factory. It pumps out bears every year," said Rick Sinnott, the area biologist for the Alaska Department of Fish and Game.

When those bears are hungry, they come into the city to feed on salmon in its many creeks and streams, and Sinnott said that is not likely to change.

"They are going to be cheek to jowl with us forever," he said.

Sinnott said efforts are being made to expand the hunting of bears in Chugach. The state park was off limits to hunting grizzlies for 30 years. Last year, three permits were issued but hunters were unsuccessful.

Killing all the bears is not a consideration, Sinnott said.

"It is a state park. People that use the state park, they want to see bears there," he said.

People using the city parks need to practice some common sense, said Dave Parker, a 25-year-old resident of Wasilla, outside the municipality.

"The bears were here before we were," Parker said. "You don't go swimming in shark-infested waters and don't expect to be bit."

Alaska Fish and Game has received 500 to 600 bear complaint calls in Anchorage this summer, usually from people reporting a bear on their deck, in a neighbor's garbage or running through yards.

A week ago, runner Clivia Feliz was attacked by a sow with two cubs in Anchorage's Far North Bicentennial Park. She had stopped to consider the orange sign with a bear silhouette that warns people way from Rover's Run trail, which follows a salmon-rich stream. But then she saw a bicyclist head down the trail, so she did, too.

"The sow found her and beat her up pretty good," Sinnott said.

Feliz was bitten on her head and neck and suffered a collapsed lung.

Six weeks earlier, 15-year-old Petra Davis was attacked by a grizzly on the same trail at about 1:30 a.m. while competing in a 24-hour bike race. She was hospitalized and treated for a crushed trachea and partially severed carotid artery.

Sinnott said he was surprised anyone thought it was a good idea to hold an all-night bike race in a park known to have bears and along a creek filled with salmon.

"I was kind of dumbfounded," he said.

There have been at least four other close encounters within a half-mile in the park involving a sow with cubs, Sinnott said.

The city closed Rover's Run trail on Tuesday. Sinnott said the sow will be killed if she can be found, not an easy task in the 4,000-acre park. Motion-sensitive cameras have been installed on the trail. If the sow is caught, the cubs are likely headed to a zoo.

"Most of the people who are attacked in town don't want the bear killed. They recognize she is a mom defending her cubs," Sinnott said. "We just can't let her live there because she will attack again."

Mike Vogel, a 51-year-old insurance agent, was stomped by a moose in 2003 on a popular city trail. A year later, a moose charged at him near the same location, so the 14-year resident of Anchorage shot and killed it.

Vogel accuses Fish and Game of catering to "bunny huggers."

"I think the pecking order needs to be re-established with humans on top," he said. "What other city in the world has pernicious wildlife running around in its city parks?"